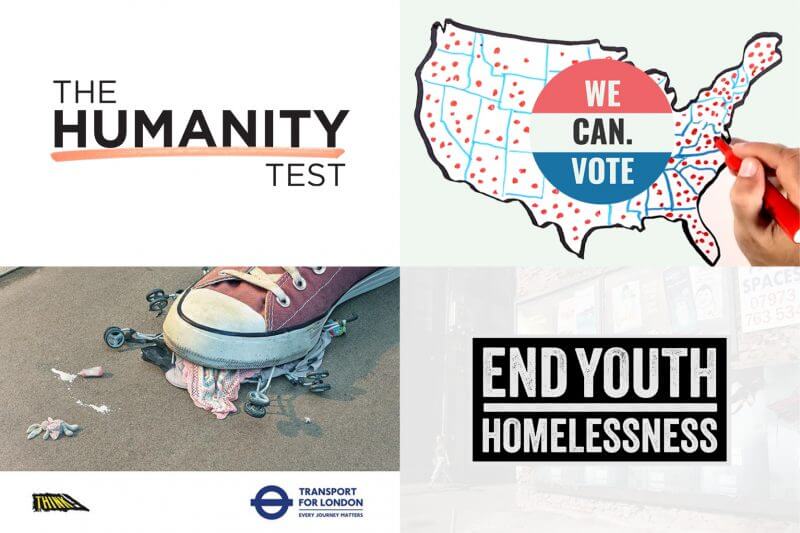 Inspired by the Google reCAPTCHA, which aims to weed out robot traffic from human traffic, The Humanity Test sees the reimagination of this system for this recent campaign brought to us by UN Women National Committee UK. This creative approach aims to highlight the sheer number of child brides across the world, highlighting the number of forced and underage marriages affecting young women and girls.

The reCAPTCHA did not test if the viewer was human or robot, as the usual system does, this campaign was aimed to test your humanity… and it works. The campaign, described as ‘immediately eye-opening’ by VICE, as it aims to set up as many users as possible to fail, in order to motivate them to share the message with everyone they know and gain more support for the cause.

The campaign clearly made a statement which leaked over into the mainstream media, fuelling headlines such as “You will definitely fail The Humanity Test”. It relied on the tactic of influencing users to feel empathy, anger and disdain in order to boost the awareness in regards to the sheer degree of exploitation of millions of girls.

72% of those who took the test, out of 8,806 people, failed the test by inaccurately identifying the images of three young women as ‘brides’. The campaign then presents the user with facts which relate to the circumstances that the child brides came to be in, from complications surrounding childbirth at the age of 13 to abuse at the hands of their husbands. 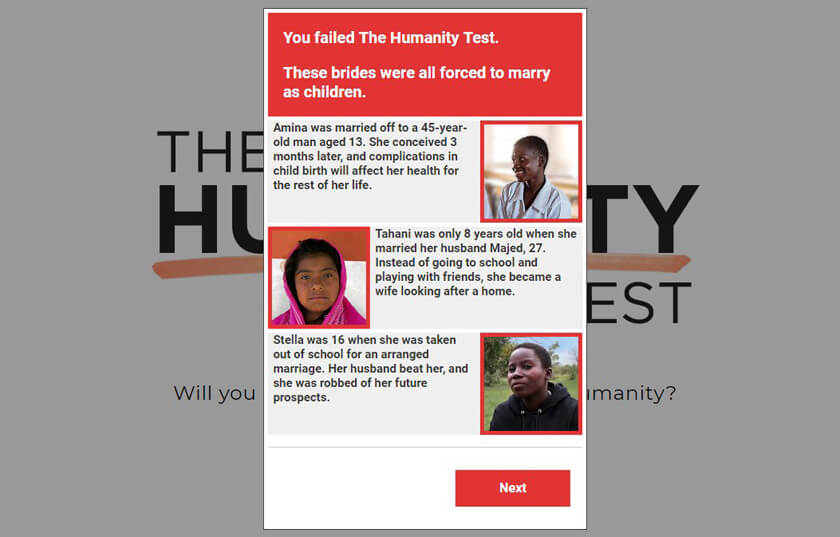 New York creatives: We Can Vote

Gun regulation is a big conversation happening all over the world right now, with the focus of the discussion firmly rooted in the USA and their gun control laws, or their lack of. With a growing number of school shootings occurring in the US, averaging out at one a week so far in 2018, it’s no wonder that this group of New York creatives took to the internet to offer those who cannot vote, but are so hugely affected by gun crime, a way to voice their opinion en mass.

The aim of the campaign is to allow those aged 18 and under the opportunity to voice their opinions on the politicians who govern and determine the law in their state and country. The site allows individuals to login via social media and casts their vote on each politician in their region, with the asset including information about their connections with the NRA via a rating system and if they represent the democrats or republicans. 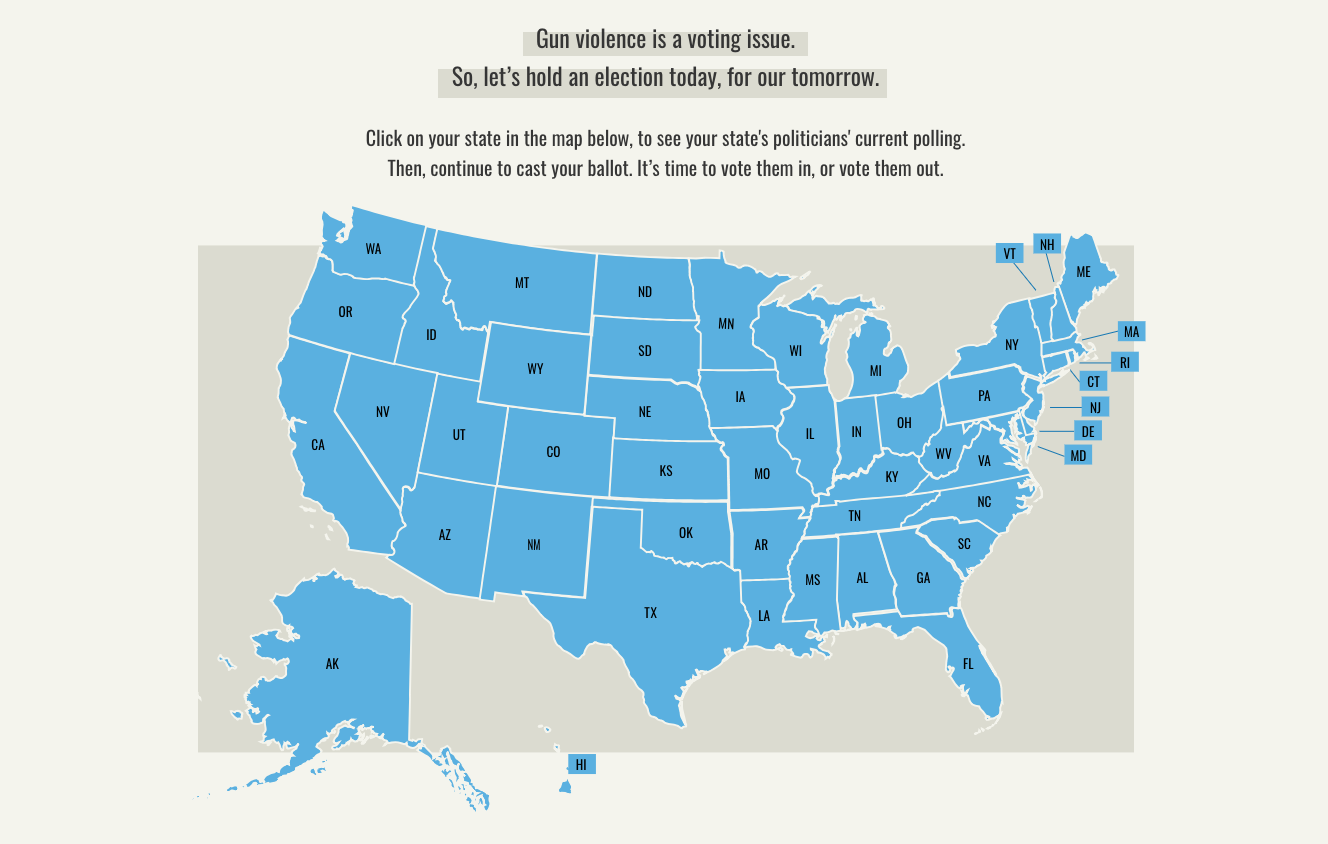 This interactive creative has the potential for real-world impact, with the capability of gaining traction across social media and allowing for the youth of America to make their voice heard, in a time where they feel specifically targetted by politicians profiteering from the NRA and failing to manage gun violence in the country that could result in their own personal safety being in jeopardy.

Hope was the core focus of the latest awareness campaign from the charity, End Youth Homelessness, which launched in early May. Using inverted images of young people sleeping rough, the composition of the photo was completely flipped on its head to create images akin to superheroes. 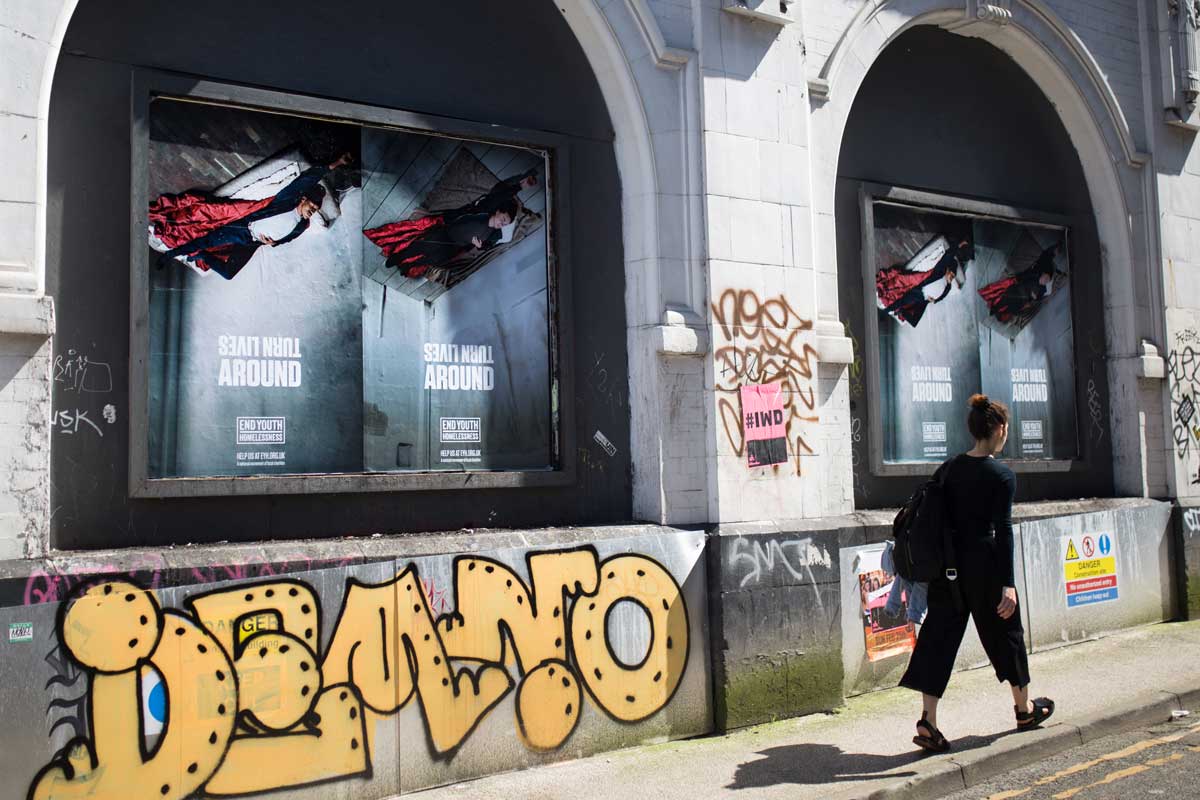 With the original image showing a young person resting on a sleeping bag, the inverted image turned them into figures in a similar style to a flying-Superman-esque-pose with a billowing cape and outstretched arm. The composition of the image changed completely by flipping it, altering the perception of the people in the image, positioning them in a heroic pose.

The core message behind the campaign is to encourage people to see past the difficult times these people have seen or are currently in, in order to support them in building better futures. The image demonstrates that anyone can beat the odds stacked against them to turn their life around, by utilising the channels of help available to them as soon as possible.

The campaign was launched in line with the End Youth Homelessness week, a week dedicated to increasing awareness, offering young homeless people a brighter future and fundraising for the cause. 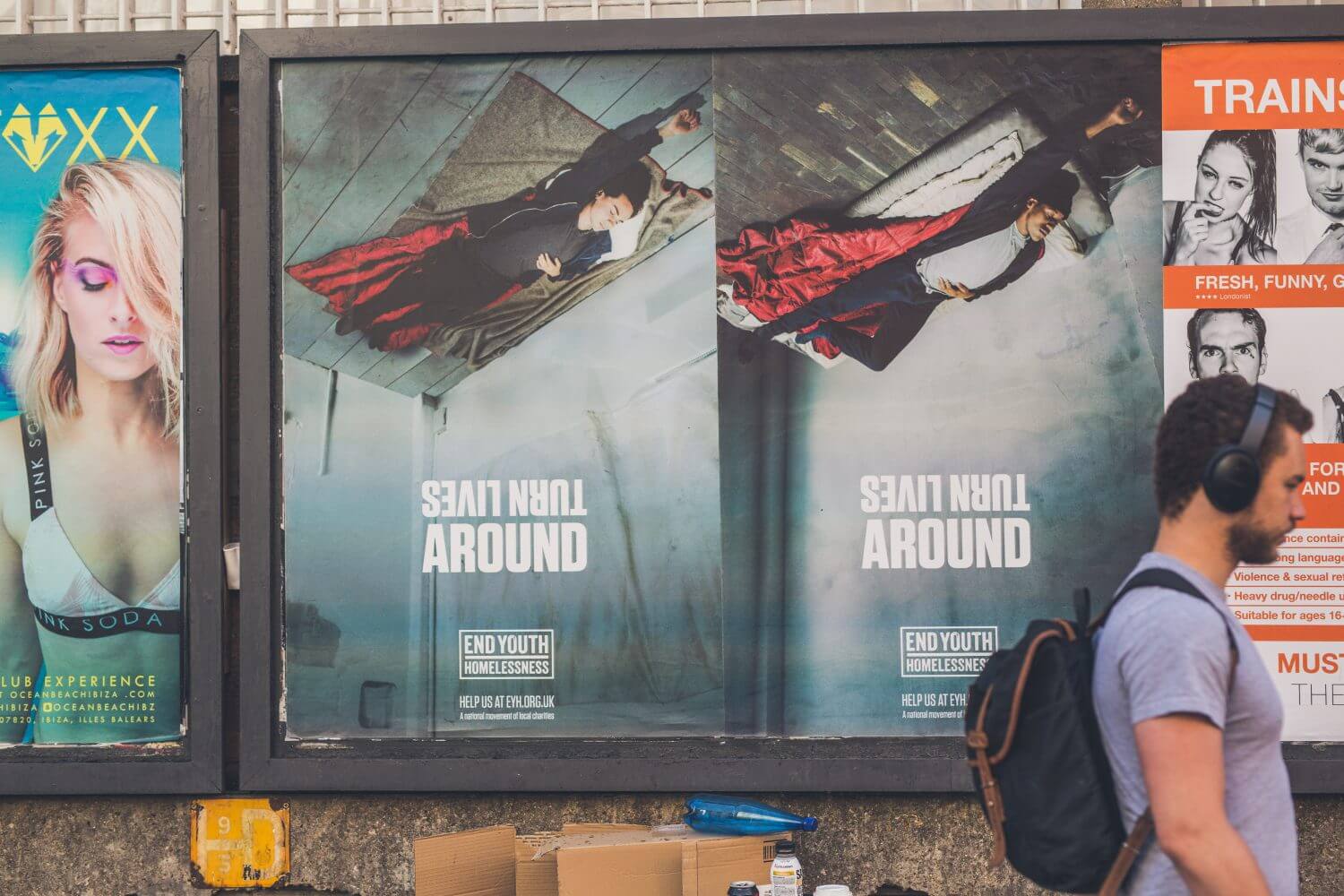 TfL: When your foot goes down, the risks go up

Due to a high number of deaths and serious injuries caused by drivers in London, the TfL launched the new campaign which aimed to target drivers, including motorcyclists, who travel at inappropriate speeds. In 2016 the region saw 804 collisions as a consequence of drivers travelling at illegal and high speeds. This resulted in serious injuries or death, with nearly half of the collisions (329) involving a motorbike. 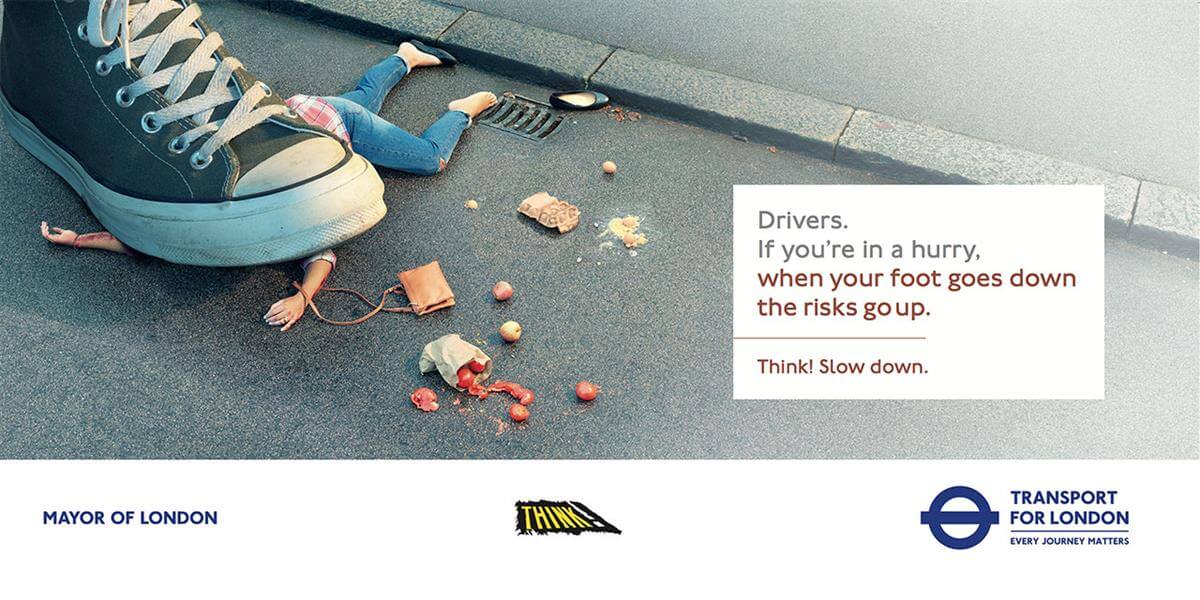 The graphic nature of the posters aims to shock the public into understanding the consequences of speeding, by removing the vehicles from the image and replacing them with a foot or a hand, in the case of a motorcyclist. Accompanied by a clear and simple message of “when your foot goes down, the risks go up”, the outdoor awareness posters rely on simple execution in order to influence drivers attitudes towards driving at suitable speeds.