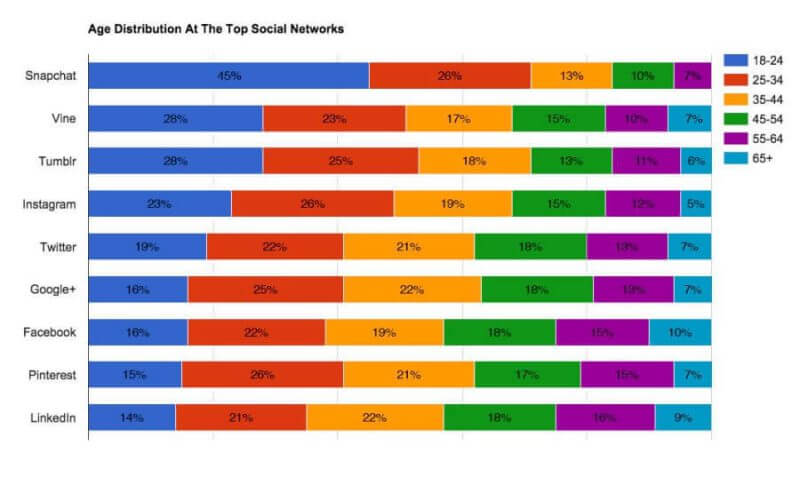 We don’t want to make you feel old but Facebook has existed for 11 years as of February this year! While social media still feels like some new fangled concept that is the reserve of trendy young things, the truth is very different. In fact, it can be argued that Facebook is now the social media hangout of the middle-aged, while those afore mentioned trendy young things document their days in short-lived burst of 1 to 10 seconds via snapchat. When you start delving into the world of social media demographics it can surprise you, and is certainly worth knowing. So where can you find your demographic these days?

Pinterest is a woman’s world. If you want to reach women you need to get your brand on Pinterest. Among US female internet users, 42% reported being on Pinterest in Pew’s late-2014 survey compared to only 13% of men. From this, we can determine that while Pinterest is universally great for any e-commerce business it is a real must for those aimed at the fairer sex.

Instagram has become the most important social network for teens meaning being down with the kids now comes with filters. If your key market is still in high school you seriously need to consider setting up an Instagram account and ditching Facebook (that’s where mum and dad hang out). The figures back this up, 32% of teenagers cited Instagram as their most important social network in Piper Jaffray’s twice-annual teen survey, compared to only 14% saying that of Facebook. So despite the majority of users falling in the 25-34 age range the key here is the importance these people place on the platform, something that needs to be taken into consideration.

If you want to mingle with the highly educated and the highest income users you need to be heading to LinkedIn. Almost half of people surveyed by Pew who stated they used LinkedIn said they had an income over $75,000 and it boasts the highest percentage of users with a University Degree or higher.

So what have we learnt? First and foremost don’t just assume that you need a Facebook and Twitter and that you’ll be hitting your target market. Make sure you pay proper attention to your key demographics, where do they actually hang out online, what are they talking about and what do they want to hear from you. It’s no good shouting about your product in one place if everyone who cares is somewhere else. The world of social media is only going to continue to develop and change and evolve so make sure your brand is evolving and innovating along with it.

Are you ready for Google’s April 21st mobile friendly deadline?