The Words of an Unprecedented Year 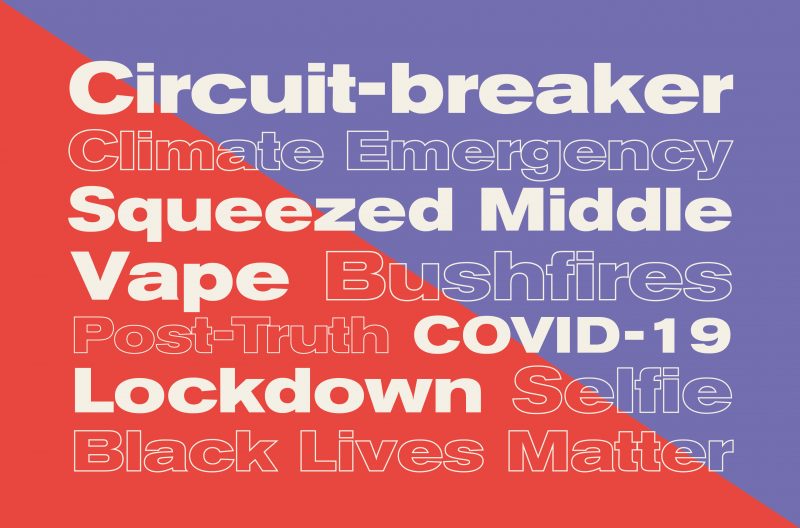 2020 has been a record-breaking year, for all the wrong reasons.

Every year, the Oxford English Dictionary (OED) releases its Word of the Year; typically a phrase of expression that has attracted a lot of interest over the previous 12 months.

Except, so much happened this year (y’know, with the pandemic and such), that the OED couldn’t pinpoint a single Word of the Year. So, the OED did the next best thing, and released a list, which included words such as:

Now, these words are all incredibly relevant to our lives at the moment. But, none of us are psychic, and we don’t know how long it’s going to be before these words leave our vocabulary. Hopefully, this time next year we’ll all be looking back, saying: “2020, eh? What a ride that was!”. Fingers crossed.

Which got us thinking – how many of the previous Words of the Year are still relevant? Don’t worry – we’re not going to go back to 2004 (when the tradition began). We’re going to look at the highlights of the past decade.

Strap yourselves in, folks; we’re going on a ride of nostalgia.

2020: The Words of an Unprecedented Year

So far this year, there have been over 64 million cases of COVID-19. Lucky us, right? Wrong. The pandemic isn’t the only bad thing that’s happened this year. Let me break that down for you:

Well, that’s quite a lot to digest. I might have to go for a lie-down. When you take all of that into consideration, it’s almost no surprise that the OED couldn’t just whittle it down to one Word of the Year.

We’ll kick things off with the beginning of the last decade. In 2011, the OED named ‘squeezed middle’ as its Word of the Year. Other notable contenders from that year included ‘Hacktivism’ (what a throwback), ‘Occupy’, ‘Phone Hacking’, ‘Facepalm’, and ‘Sodcasting’ (playing music through a phone in public).

But, what makes ‘squeezed middle’ all the more remarkable is that it pipped ‘Arab Spring’ to the post. The ramifications of the Arab Spring are still being felt across the Middle East, and the world (as we talked about last year), whereas ‘squeezed middle’ is/was a niche phrase, coined by Ed Miliband during an episode of Radio 4’s Today Programme.

Unlike ‘squeezed middle’, I actually feel like selfie’s inclusion in the OED is totally justified. In 2013 alone, its frequency in the English language increased by 17,000%!

Not to mention that 2013 became the year that the humble selfie officially took off, with everyone – from the Obamas’ to the Pope’s ‘Papal Selfie’. Not to mention that seven years later, people still take selfies – meaning its place in the dictionary is definitely understandable.

In 2014, OED announced ‘vape’ as its Word of the Year, after its frequency of use doubled in just over 12 months. And, that’s before we even mention how the vaping industry is now a multi-million-dollar industry.

2014: a time to think about your latest bae, and the revolutionary power of contactless payments.

Simpler times; I miss them.

In 2015, OED made its Word of the Year a pictograph: 😂 (otherwise known as the ‘Face with Tears of Joy’ emoji).

Even though emojis had been around since the late 1990s, 2015 saw their popularity surge, with ‘😂’ being the most-used globally (accounting for 20% of all emojis used in the UK in 2015 alone).

In a year where ‘AdBlocker’, ‘Brexit’, ‘Dark Web’, ‘Lumbersexual’ (I Googled it, so you didn’t have to), ‘On-fleek’, and ‘Refugee’ were shortlisted to become Word of the Year, it does make you think about the relevance. Sure, Brexit is still a massive (and relevant) part of our lives – but when was the last time you used ‘on-fleek’? Hopefully, you never used it anyway, but that’s beside the point.

Out of all of the words that I’ve talked about so far, ‘😂’ is probably still the most relevant. I can guarantee, hands-down, that you will use it more than once, every day.

What happened in 2016, that made the OED choose ‘Post-truth’ as its word of the year? I can’t quite put my finger on it…

(What, did you think I was actually going to show the real one? 🤫)

Thanks to the EU Referendum (Brexit) and the 2016 election, the frequency of post-truth in the English language soared, with it quickly becoming a mainstay in political commentary (and without the need to explain what it means).

Granted, post-truth (the phrase) is new to me – but I’m well aware of the uglier cousin, Fake News – which has dominated the not-fake news since 2016. And, especially in the year of a pandemic, misinformation has proven to be deadly.

In August 2020, the BBC reported that at least800 people might have died around the world, as a result of COVID-related misinformation – including drinking methanol and taking ‘miracle’ supplements – which is terrifying. So, does post-truth still hold relevance in our language? The answer is obvious; while ever there are people spreading misinformation, there will always be a need for post-truth in the OED.

It’s pretty amazing (to me anyway) that we made it all the way to 2019 before the climate got a mention in the OED. Thanks to heightened public awareness of climate science, and the implications of climate change on our communities, the climate emergency was on all of our minds by the end of 2019.

In September 2019, use of ‘Climate Emergency’ was 100x as common as it had been in the previous year. And, all the contenders for Word of the Year in 2019 were climate-related, with ‘Climate Action’, ‘Climate Crisis’ and (my personal favourite) ‘Climate Denial’ – proving that this is an issue that people care about – otherwise they wouldn’t be talking about it.

In fact, if it wasn’t for the issues I’ve already mentioned in 2020, I think it’s pretty safe to assume that 2020’s Word of the Year would have been climate-related too. We’re now hyper-aware of our impact on the environment and our carbon footprints – and the importance of reaching net zero in the near future.

Petition to change 2020’s Words of an Unprecedented Year to just the “🤷‍♀️” emoji, because none of us has a clue what’s going on anymore.