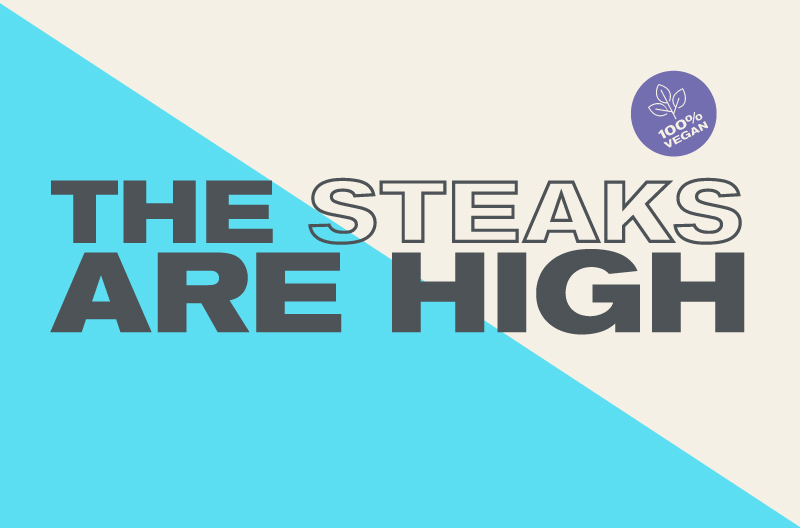 Last week, we dived deep into a big, leafy bowl of utilising veganism as an effective marketing tool…

…From where it all started, to how veganism gained momentum as a movement, and became a marketing tool.

This week, we’re tucking into a dairy-free dessert platter of vegan brands smashing their marketing, and making the world a better place in the process:

Okay, okay, so Greggs isn’t a vegan brand, per se. But, if you cast your mind back to January 2019 (a largely simpler time), you’ll remember that Greggs teamed up with Quorn to release their infamous vegan sausage roll.

And, thanks to some good PR, a YouTube ad mimicking an iPhone launch (not to mention a rant from Piers Morgan on Good Morning Britain), the vegan sausage roll became an overnight viral sensation (the fact it tastes better than a traditional sausage roll is a bonus). In fact, Greggs reported a 9.6% increase in sales during its first seven weeks.

Boasting a veritable butcher’s shop of 100% plant-based meat alternatives (mince, burgers, sausages; the works), Meatless Farm have gone from strength-to-strength over the past two years.

Taking an inclusive approach to their marketing efforts, Meatless Farm appeal to both vegans and meat-eaters alike, by simply using the term ‘plant-based’ so as to not alienate potential customers. ‘Plant-based’ can sometimes appear less threatening than ‘vegan’, especially when you’re not looking for a complete lifestyle change, and maybe just trying to reduce your meat intake.

In 2020, Meatless Farm launched its “M… F…” marketing campaign. This tongue-in-cheek campaign was aimed at present and former meat-eaters alike. And like all good, head-turning marketing campaigns – it got investigated by the ASA! It turned out some folk weren’t exactly fond of the “M… F…” wording and what it might have stood for. Needless to say, it was a resounding success; Nielsen reported a 149% increase in sales in 2020, year on year.

Pair one of the world’s most up-and-coming meat alternative brands with an increasing demand for meat-free products during the height of a global pandemic, and well, we think it’s M… F… genius!

It doesn’t need to be edible, to be credible

Although food might be your first thought when someone mentions ‘vegan’, there are other companies who’ve jumped on the bandwagon and are benefiting from this ever-evolving trend.

Iconic footwear brand Dr. Martens have expanded their shoe range in recent years offering vegan alternatives to their classic leather boot (and now sandal) collection. This change is symbolic of the times – a brand known for their hard wearing leather boots saw such an opportunity in the market that now, over 4% of their line is vegan!

Whilst in 2019, they claimed that part of the driving force behind a 70% increase in sales was thanks to their introduction of vegan products. It’s even predicted that the vegan leather market will take over the animal leather market by 2025… the demand is there and Dr. Martens are thriving!

All kinds of inks can include some kind of animal products, most notably glycerine as a stabilizer. So whether you’re thinking about printing ink or tattooing ink, companies have started to shift their focus to a vegan conscious mindset….

Print company Hatch was the first in the UK to earn the Vegetarian Society vegan accreditation; every product they use within their company is sourced with the assurance that no animals have been, or will be, harmed in the process. Paper, ink, glue and tape… it’s all vegan! This kind of forward th-ink-ing not only supports the company’s environmentally friendly initiatives, but puts them on the map as the leading vegan printers in the UK!

Cosmetics can be vegan too, right?

That’s right, whether of their own volition or through external pressure (power to the people); cosmetics companies are clambering over one another to meet the demands of a cruelty-free audience. It’s no surprise really, as it’s estimated that the global vegan cosmetic industry will be worth $21.4 billion by 2027… unbe-leaf-able!

Although animal testing is obviously a BIG no no in the vegan movement, ads like the Humane Society International’s 2021 ‘Save Ralph’ campaign, have pushed cruelty-free products further into the collective consciousness of the mainstream. So much so that even large, well-established brands are being held accountable.

In 2017, customers rallied together to boycott cosmetics giant, NARS, after it became apparent they were testing on animals in order to sell in China. Just goes to show, even if you’re not a vegan, it’s definitely cool to be kind.

Unsurprisingly, smaller brands and chains like Superdrug have actually profited from catering to the vegan and cruelty-free market, stating that the purchase of their own vegan beauty products rose by 30% during Veganuary of 2020!

Adopting vegan and plant-based products is becoming more lucrative for brands – and not just the small-time enterprises and SMEs, conglomerates are stepping up to the plate too. In 2020, Unilever committed to investing in plant-based alternatives and the businesses that manufacture them, announcing an annual sales target of €1 billion for these products in the next five to seven years – not mushroom for improvement there!

So there you have it, vegan marketing and the brands knocking it out of the park – in a nutshell. Good advertising (and good business) pays attention to the trends of today, but when those trends drive positive change – well, what’s not to love about that?