The Month That Was November 2022 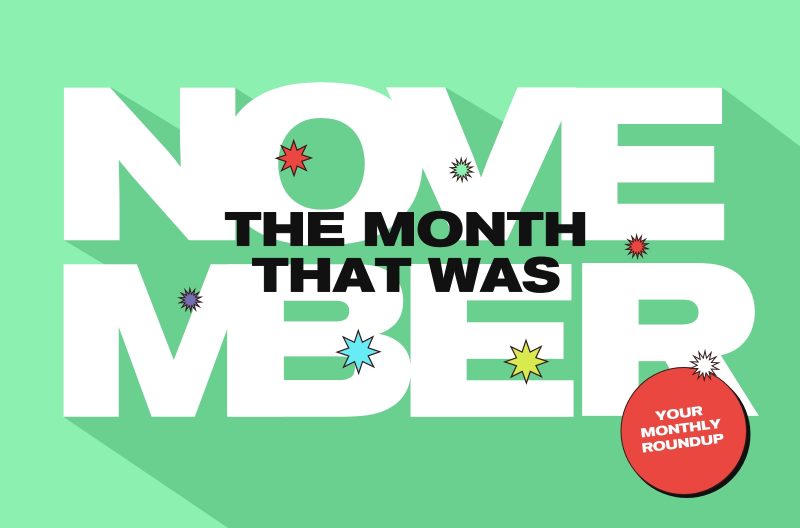 With Black Friday sales, the leadup to Christmas and the kickoff of 2022’s World Cup, November was a busy one.

So, before we start with the carol-singing and Christmas cheer, let’s explore what went down in November, from social media to SEO to some of our favourite marketing campaigns from the month.

The world of social in November 2022

It’s always nonstop when it comes to social media, so let’s not dilly-dally – here’s some of our top updates from the social sphere as of November 2022.

• Elon Musk shares his roadmap for the future of Twitter, following last month’s backlash
• A recent report from Meta shows that political content on Facebook is on the decline
• Instagram are trialling the option of 4:5 ratio for profile grids, rather than just square

A ‘Musk’ read: Tesla CEO shares his plans for Twitter

Following Elon Musk’s Twitter debacle last month, (which you can read all about in this blog), we’re here with an update, thanks to Musk supplying us with plenty of insights into his plans for the social platform.

His reports show that new signups to Twitter are at the highest they’ve been in years, and active user minutes have shot up to 31.5 minutes per day on the app, another all-time high.

Clearly, Twitter has started to regain traction after several years spent trying to claw its way back up on to people’s top-used apps. But will these high statistics last? Or is this just the short term aftermath caused from Musk’s controversies drawing people to the app? The latter seems likely.

Musk’s plans are a little here, there and everywhere, after pulling the blue tick verification fee after impersonation levels spiked, and then reinstating it soon after. Plans are also in place to launch Twitter Notes, which will allow users to post longform content, rather than the previous 280 characters. The new proposal will enable users to write up to 2,500 words, which will be natively embedded into the app for easy sharing.

And of course, we couldn’t forget about Musk welcoming back Trump (letting users make this decision with a simple Twitter poll!), alongside unbanning previously banned accounts, all under the idea of allowing ‘free speech’.

He definitely knows how to make the headlines.

Whether this will all die down and we’ll see Twitter return to a state of normality is yet to be revealed, it looks like we’ll just have to wait and see…

Towards the back end of November, Meta, Facebook’s parent company, released its latest Widely Viewed Content Report for Facebook, detailing Q3 of 2022, which included some surprising insights…

Originally, the idea behind this report was to show the most viewed posts by users of the app, to show how Facebook’s algorithms don’t purposely promote right-wing and extremist content. However, this was a little bit of a shot in the foot on Meta’s part, as it didn’t ever really manage to prove this narrative. In fact, it often highlighted quite the opposite.

But this time around, things are looking a little different.

There’s significantly less political-related content in the report, with tabloid pieces and celebrity gossip taking a more prominent position. Although this type of content is probably not what Meta had in mind, at least the report has succeeded (finally!) in showing the narrative they initially wanted to push.

Unfortunately, this data doesn’t offer much for content marketers looking for ways to maximise their Facebook reach, unless they can find a way to angle at these tabloid-style trends.

Instagram are constantly going through changes to their layouts, and the latest installment is that they’re potentially developing and trialling a new setting to change the aspect ratio of your profile grid.

#Instagram is working on a setting to change the aspect ratio of your profile grid between 4:5 and square format 👀 pic.twitter.com/vmr3Xieukk

This update would allow users to shift the appearance of their profile between square format and 4:5 ratio.

We don’t know the exact reasoning behind Instagram doing this yet, but it would definitely be a win for those who primarily post Reel content. And as we know, Instagram are really, seriously, keen to push Reels.

Updates to SEO in November 2022

We can always count on the search landscape to have some updates month on month. Luckily, November’s updates aren’t anything too drastic, but still interesting nonetheless.

• Google stalwart John Mueller, weighs in on the future of backlinks
• Google Panda is no more (sort of), but say hello to Coati
• A reminder to configure GA4 ASAP to guarantee year-on-year holiday season data

Strength of backlinks predicted to drop

Right at the start of November, we saw Google weigh in on the future worth of backlinks, with industry expert and Google Search Advocate John Mueller making his predictions.

Joined by Google specialists Lizzi Sassman and guest speaker Myriam Jessier, Mueller suggests that as Google continues to better understand how “content fits in within the context of the whole web”, the algorithms won’t need to rely as much on inbound links.

This isn’t to say that your backlink profile is totally pointless however, as a good backlink profile can tell you a lot, such as a site’s trustworthiness, who trusts the site and how authoritative the site is within its niche. The panel doesn’t discuss this aspect of inbound linking, though Mueller does say that a backlink profile will continue to be useful in terms of discovering content online. After all, we have to find pages somehow!

To summarise, don’t disregard your backlink profile, but as search continues to evolve, it won’t be as necessary as it once was all those years ago.

Cast your mind back to 2012 (sorry to remind you, but that was over 10 years ago now!) when Google launched their Panda algorithm update. The update truly shook things up, designed to lower rankings for sites who had what was deemed low-quality content. But now, Panda is being superceded, kind of.

Discussed on the SMX Next keynote, Coati is named after another black and white animal as to not deviate too far from the original. Coati represents less of a replacement and more of an evolution of Panda, still focusing on content quality and the use of ‘black-hat’ techniques, like link farms.

So even though there’s not a huge change here, when the SEO community caught wind of Coati, the shift in terminology lit up SEO forums and threads across the web like the proverbial Christmas tree.

Google Analytics 4 settings to check before the holiday season

Although you still might feel it’s too early to think about this year’s festivities, we’ve got some bad news for you Scrooges: it looks like you might also need to think about Christmas 2023 if you want to measure your festive season sales efforts!

Though Universal Analytics (UA) is still active and allows you to measure this year’s data, if you want a year-on-year comparison of this year and next, you’ll need to start configuring GA4 now.

With that in mind, this article relays 10 important things to ensure are being tracked properly to guarantee you get accurate data next year. This includes ensuring your ecommerce platform has an easy app or plugin for GA4 tracking, checking if you need domain tracking and adding any necessary referral exclusions – check out the full article here to make sure you’re on track.

Our favourite marketing campaigns this month

Come this time of year we tend to see retailers, businesses and organisations pulling out all the stops with their marketing campaigns thanks to Black Friday and the lead up to Christmas. And add to that the 2022 winter World Cup, there’s a lot to cover.

• Women’s Aid ‘He’s coming home’ campaign to advocate against domestic violence enhanced by the football
• Consumers and retailers ditching Black Friday in favour of a more sustainable ‘Green Friday’
• Email marketing platform Mailchimp’s ‘Give Where You Live’ campaign, urging people to donate to local nonprofits this year
• And of course, the eagerly anticipated John Lewis advert was released!

In light of the 2022 Qatar World Cup, which has already sparked controversy all-round due to the host country’s human rights views, the charity Women’s Aid have launched a powerful new campaign.

Taking place in the winter for the first time, many will be watching the football at home. And with the sport comes heightened emotions, whether this be joy or anger, and for many women, a time of fear.

Launched to correlate with International Day for the Elimination of Violence Against Women, the campaign is simple but chilling, and addresses everything it needs to say in just a matter of seconds with the aim of reassuring women that they’re not alone, alongside encouraging people to donate to the charity to help save lives.

With Christmas just around the corner, Black Friday is the perfect chance to get a headstart and grab a bargain. However, it’s also a time of mass consumerism and fast fashion, which cause a huge detriment to the planet – which is where Green Friday comes in.

People are increasingly ditching the high street in favour of Green Friday, a day to connect with nature or even just make more sustainable shopping choices. But it’s not just consumers that get involved. Huge retailers also get involved too, including outdoor clothing brand Passenger.

The shop stated that they wanted to avoid Black Friday for as long as possible, but it was having a negative impact on the business. So, instead, they went in favour of Green Friday. With every sale over the weekend, Passenger vowed to plant five trees to help protect the rainforest – a great alternative to the typical mania of Black Friday weekend.

Mailchimp’s Give Where You Live campaign

Mailchimp, popular email and marketing platform, recently released their ‘Give Where You Live’ campaign, encouraging people to donate to their local small nonprofits. With many nonprofits still feeling the post-pandemic impact, these organisations are being stung by fewer donations than usual.

Released at the time of year when people are most likely to give and donate, the charming, engaging animated video has so far seen a positive response, backed up by an influencer program and promotion from key NFL players.

And last, but certainly not least, the John Lewis ad.

It would be rude to talk about some of the biggest campaigns we saw last month without mentioning the John Lewis advert. Year on year the retailer has to live up to incredibly high expectations, with the whole of the UK looking forward to watching each Christmas.

We’ve seen The Bear and the Hare, The Man on the Moon and even The Boy and the Piano, but this year John Lewis brought us: The Beginner.

We were just as shocked as you to hear a cover of Blink-182’s ‘All the Small Things’ for this year’s ad, but surprisingly…it works!

The advert tells the story of a man learning (albeit slowly, and sometimes pretty miserably!) how to ride a skateboard to ensure the family’s new foster child feels comfortable in her new home this Christmas, in aid of the Action the Children charity.

Trust us, it’s heartwarming, endearing and a little bit of a tearjerker!

The holidays are coming…

And that’s a wrap! Speaking of wrapping, have you got the Christmas shopping sorted yet? (Don’t worry, we haven’t either.)

As always, a lot went down in November, and we’re sure December will be just the same. But for now, we’ll leave it there, and we’ll see you in January for our roundup of the entire year that was 2022.

If you’d like to learn more about anything discussed above, or if you need help with SEO, social media or anything else marketing, don’t hesitate to give us a call - we’re a friendly (and festive!) bunch.

The Month That Was October 2022