LITTLE Leave The Big City – Staff Bonding Down On The Farm 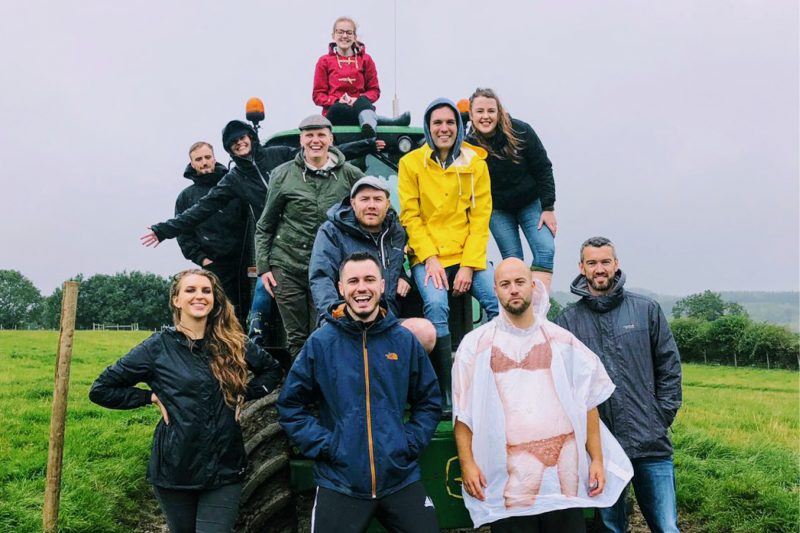 Here at LITTLE we’re not short on staff perks such as duvet days, flexible / remote working and Perkbox just to name a few. Among these benefits is a summer away day for staff bonding, featuring a fun team activity and general pats on backs for a good job all round.

This year we decided to take the beaten track and opt for an activity that we knew we would take to easily, just as ducks take gracefully to water – farming.

We chose Farm Adventure in Masham for our toe-dip into the world of agriculture (or “ag” as us seasoned professionals call it) and set off on Friday 16th August for a day of farming fun.

Upon Arrival… Put on Your Raincoat

After arriving at the farm we congregated in the welcome area, a charming zone with an open fire and shelter.

As we pottered around sipping tea and staring at the steadily increasing flow of rain falling from the sky, small questions began to form asking whether we were, in fact, ready for the farming experience we had been so eager for mere hours earlier.

These (ridiculous) questions were thankfully interrupted by the arrival of our guide and mentor for the day, Chris.

We were quickly sorted into two groups: ‘A LITTLE Bit of Lip’ consisting of Ellie, Grace, Chris, Ian, Mark and Steve, and ‘The Young Ones’ featuring the likes of Sam, Josh, Anna, Lucy and Luke.

Now that we were in our teams it was time to get started and sort the wheat from the chaff!

The first activity of the day was sheep herding. The task was to herd as many sheep as possible between two sets of wooden fences in the time limit, after which you would have to herd them into a pen at the bottom of the field.

This sounds like a simple enough task – we’ve always been told that sheep follow the crowd, right? Wrong. Sheep are slippery escape artists, that will betray their friends at a moments notice for their freedom.

The first team to hit the stage were ‘A LITTLE Bit of Lip’. The sheep were a lively bunch by all accounts, working their wiley tricks to evade the efforts of the group to herd them through the fences.

Despite the best efforts of the sheep, ‘A LITTLE Bit of Lip’ handled the task with the finesse and skill of a gang of giant sheepdogs, racking up an impressive score.

‘The Young Ones’ were the next up to the plate, with all the arrogant confidence of youth. This confidence was swiftly nipped in the bud however, as sheep ran amok through the field, with few points being racked up by the team. Baa-d luck guys!

The next challenge of the day was tractor racing. Naturally, ‘The Young Ones’ approached this task with all the bravado of a gang of formula one veterans. Tokyo Drift move along – Dirt Road Rampage here we come.

The idea was simple: race your tractor as fast as you could along a winding track, and then do the same in reverse, without knocking over any of the poles at risk of points being taken off.

To begin the races were going well. A few poles had been knocked down, but otherwise the scenes had been wholly impressive for a gang of folk whose nearest experience to tractor racing had been sit-on lawn mowing (at best).

The streak of success was destroyed in classical townie fashion by Josh, who managed to reverse his tractor not once, or twice, but thrice, in the wrong direction destroying the carefully built reputation of LITTLE as tractor driving aficionados.

The overall winners of the task were ‘A LITTLE Bit of Lip’, despite ‘The Young Ones’ effort – their need for speed meant they sacrificed vital points after knocking down plenty of poles.

After a morning of herding animals and racing tractors wellie wanging seemed to be, on the surface, a welcome break. Everyone can throw, right?

It turns out however that throwing wellies takes real skill and an in-depth understanding of the aerodynamics of the common wellie.

The techniques were interesting and varied, ranging from underhand, overhand, and thrown over the head facing the wrong direction (unsuccessful but inventive).

Overall A Little Bit of Lip took the lead, mostly down to one olympic-style throw from Steve.

We weren’t free from animal herding just yet – the pigs were waiting.

The pigs were much livelier than the sheep, a playful frollicking bunch that showed no fear. We were also warned by our guide Chris that the pigs wouldn’t be shy about trying to take a bite out of us if they got a chance, and to watch our fingers!

We were armed with ‘pig boards’, large slabs of grey plastic that we could use to herd the pigs in the right direction, and let loose one team at a time with the goal of getting as many pigs as possible over as many obstacles as we could.

The pigs proved better playmates than the sheep for ‘The Young Ones’ who managed to herd more pigs over obstacles than their opponents.

However, ‘A LITTLE Bit of Lip’ went for a tactical advantage by gaining bonus points at the end of the round for being the first team to herd a pig over an obstacle in a last ditch point battle, putting them into the lead.

The next activity on the list was the assault course. An SAS addition to the day with a farmyard twist.

The course consisted of running a wheelbarrow and bucket to a hay bail, throwing your bucket over the bail and then hopping over (leaving the wheelbarrow to wait for you).

There was then a short army crawl under tarp, to emerge covered in mud, grab your bucket, and run to what we can only assume is a model cow for milking practice, to “milk” the plastic udders for 15 seconds into your bucket.

After a good old fashioned milking you had to sprint back to your wheelbarrow, and wheel yourself to a large measuring canister to pour your milking spoils into, after which the next member of the team would go.

Despite impressive efforts from all members of the teams, the result of this was a frustrating (and very muddy) draw.

The last activity of the day before lunch was egg throwing.

With our rain coats zipped up as far as they could go, we lined up opposite a partner at arms length apart.

The rules were simple, after every successful throw the person holding the egg would take a step back, and then match theirs with whoever had managed the biggest stride. Drop your egg and you’re out!

Knowing the risks of missing your catch made each of us extra tentative with our throws, not wanting to add raw egg to the mixture of mud and rain that was already covering each of our clothes.

Egg-throwing partners began steadily falling away as more and more eggs fell short of the throwing distance. The last pair standing were from ‘The Young Ones’, who celebrated with one last long-distance effort that ended in one final, symbolic, smashed egg.

Farm Fact of the day: The longest egg throw recorded was 98.51 metres – a distance our team members can only dream of!

Lunch Time – Pigging Out on The Farm

At last it was time to take a break from fun on the farm for a bit of lunch. The Farm Adventure team had put on a fantastic spread of barbecued burgers and sausages for us to dive into, and we were only too happy to oblige (sorry pigs!).

It was a welcome break from the rain, and members of the team could be found gathered around the fire drying rain jackets desperately before the final task of the day – the scavenger hunt.

The last opportunity to prove which team was the most fitted to farm life was the scavenger hunt, a two hour ramble around the farm solving clues. Much like a very country Scooby Doo.

Armed with a map, answer sheet, and walkie talkie, both teams were sent (reluctantly) back out into the rain for one final farming hurrah.

The clues could be obscure, ranging from types of plants, to small model animals hidden in the shrubbery, but each team persevered, taking their time at each clue to come to a solution that would, hopefully, bag them some points.

Awards and Farewells – Saying Goodbye to The Farm

After the scavenger hunt it was time to settle down by the fire for the award ceremony.

‘The Young Ones’ were holding onto the desperate hope that the scavenger hunt could save them from some of their earlier farm failures, however it was not to be.

The final scores put ‘A LITTLE Bit of Lip’ into the lead. ‘The Young Ones’ had to accept defeat and pat their opponents on the back for being the better ‘ags’ of the office.

On the whole our day on the farm was a fun and unique experience, filled with plenty of memorable team building moments – and a couple of blunders that won’t be forgotten in a hurry!

We might not be farmers by trade, but after our trip to Farm Adventure the LITTLE team are certainly farmers by heart!