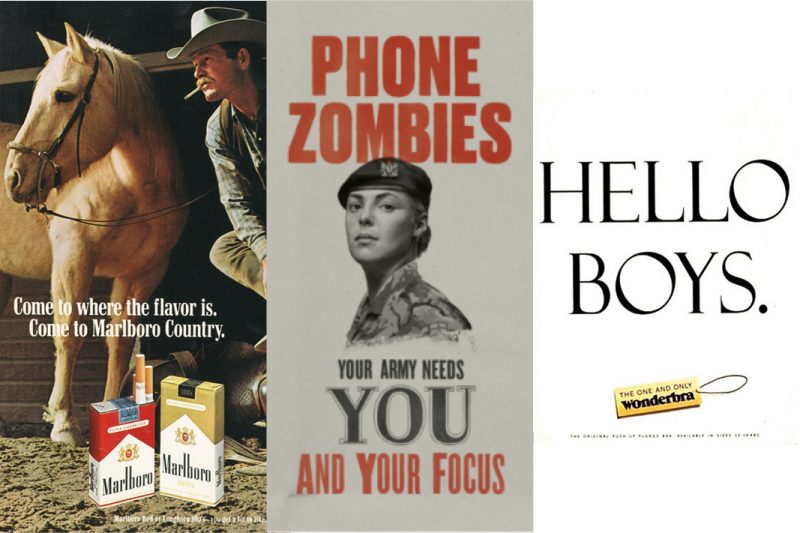 Isn’t it strange to think that we owe most of the modern advertising techniques to the tobacco giants of the 1920s?

Sure, the age of Edward Bernays and the Marlboro Man may be well behind us, but their forward-thinking strategies are still seen in many aspects of modern adverts.

From the Ancient Egyptians carving information into steel on the pyramids, to Gutenberg introducing the world to his press in the 1440s, we’ve always needed a way of spreading news. And, with the introduction of radio, television and the internet in recent years, it’s no surprise that advertising has had to evolve and adapt in line with the challenges brought by modern media.

Paired with the continually changing attitudes and behaviours of society, advertising is now coming up against more regulatory challenges, as we become more self-aware, and automatically more critical of the content we are served with. In a world where ‘snowflakes’ are scorned and being thin-skinned is seen as a negative, are regulatory bodies simply moving in line with the times? The whole point of ads used to be to cause a stir and get people talking – but now, all it takes is for one person to be ‘offended’ and then the commercial is banned.

After we heard in the studio that the Government had forced Cadburys to pull one of their Freddo ads, we asked ourselves, why? Well, because it allegedly encouraged children to take up looting.

We’ll just let that sink in.

This got us thinking: some of the most iconic commercials of the twentieth century definitely wouldn’t make it past the advertising regulatory bodies if they were made today. So, here we are, taking a little trip down advertising’s memory lane. 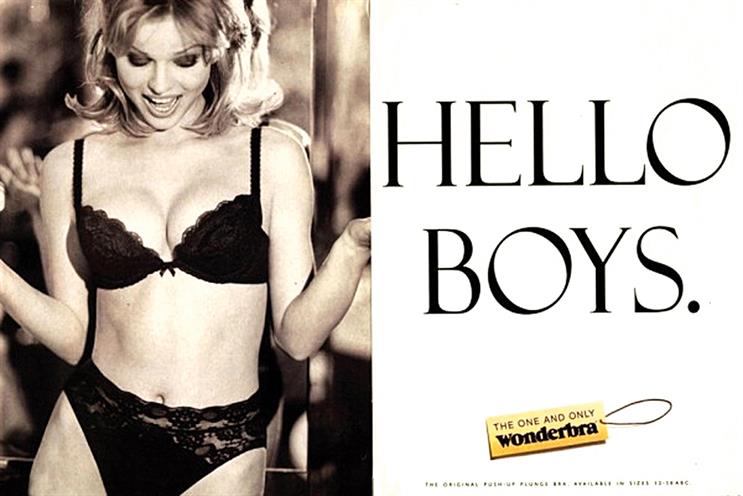 We get off to a strong start with Eva Herzigova’s iconic Wonderbra campaign. ‘Hello Boys’ was a billboard campaign, made up of huge roadside posters, that sparked a sensation when it was unveiled in 1994. The ad was that popular with commuters that it was blamed for stopping traffic and causing car crashes. More recently, the campaign was crowned the most iconic advert of the past 20 years in 2011 by the general public – proving that its impact still withstands today.

It goes without saying that ‘Hello Boys’ definitely wouldn’t be seen on billboards today. In recent years the campaign has come under scrutiny from critics, who claimed that the ad was overtly sexual. Even Eva Herzigova has spoken out about how the campaign attracted criticism for being derogatory towards women – but she still believes it was more empowering than embarrassing.

Obviously, ‘Hello Boys’ is not without its issues. Even in the modern age of ‘gender equality’ and inclusivity, you wouldn’t see a man modelling underwear with the tag line “Hello Girls” – it wouldn’t be well received at all. Despite this, there are still double standards when it comes to underwear brands and their marketing campaigns. When Shawn Mendes’ Calvin Klein campaign was released, it attracted comments from both men and women that wouldn’t be acceptable if they were related to a women’s underwear campaign. It certainly seems that society in itself has a long way to go before we can truly claim to be equal. 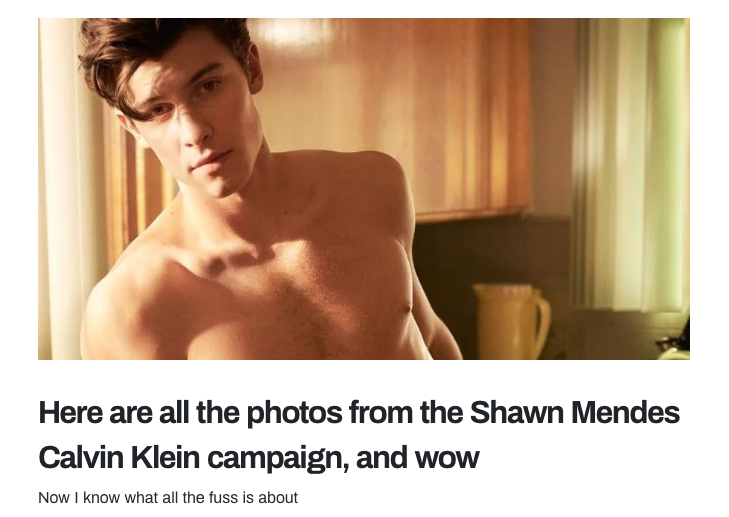 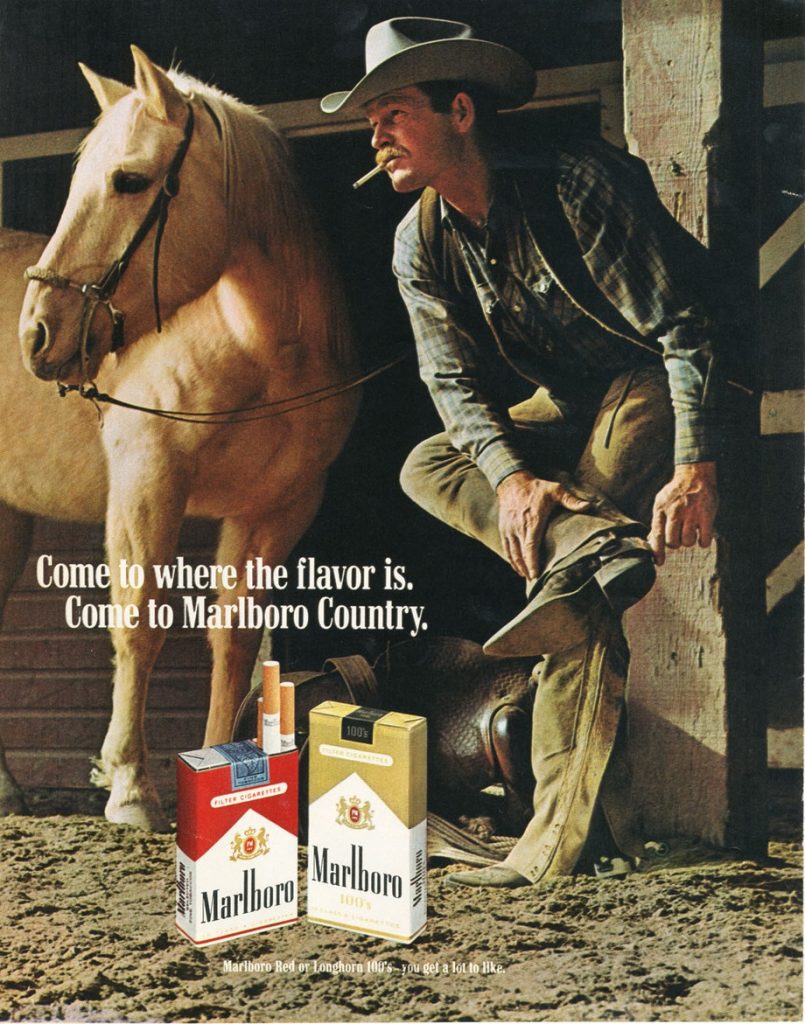 Next on our list is the Marlboro Man, who was the face of Marlboro cigarettes for more than half a century. Born in the depths of the Cold War, Marlboro epitomised everything that the American man wanted to be – rugged and masculine – and who didn’t want to be a cowboy in the early 1950s?

Needless to say, this wasn’t always the case. Marlboro cigarettes were initially targeted at women – they were ‘Mild as May’, unfiltered cigarettes – until research revealed that they weren’t safe. Once introducing filters became necessary, the feminine image only intensified – meaning Marlboro needed to change their tact if they were going to continue appealing to the ‘modern’ American man.

Many of Marlboro’s most iconic adverts were paired with the tagline “come to where the flavour is” – which encouraged smokers and non-smokers alike to jump ship and try the brand. By channelling the idea that smoking was about embracing danger and taking up the habit was an independent choice, it wasn’t long before the Marlboro Man was embedded into American culture.

Unsurprisingly, you wouldn’t see the Marlboro Man strolling on the streets today. Surprisingly, he remained at the face of Marlboro cigarettes until 1999 – which shows how quickly society has turned its back on the tobacco industry in recent years. Nevertheless, ad agency Leo Burnett managed to create a campaign in 1954 that boosted sales by 3000% in the following year – which isn’t a bad return, if you look past the well-known risks associated with smoking today.

2019: Karmarama & Ministry of Defence’s ‘Your Army Needs You’ 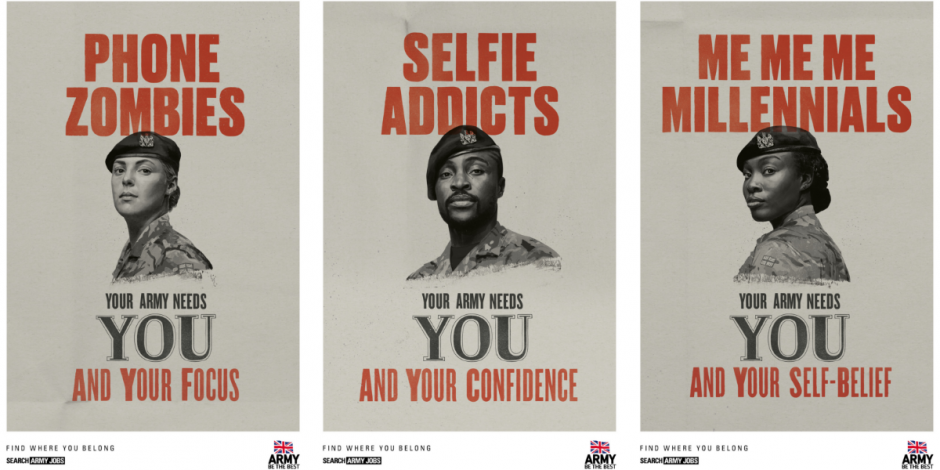 Karmarama’s posters for the Ministry of Defence’s latest recruitment drive may not have been banned (yet), but they caused an uproar when they were released.

Designed in the style of the iconic Lord Kitchener recruitment posters from World War I, the new posters look to encourage sign-ups to the army. Working on the basis that 74% of 16 to 25-year olds are looking for “a job with a purpose”, the MoD’s campaign targeted ‘Phone Zombies’ and ‘Me Me Me Millennials’ (or, young people, to you and me) to unlock their potential.

The backlash to the campaign was swift. Within a week of its release, one of the faces of the advert threatened to leave the army, after his face was used without his knowledge to inspire ‘snowflakes’ to join the forces. Not only this, but the campaign was badly received on Twitter, and the MoD were subsequently accused of targeting vulnerable young people with the ‘January Blues’ (which they were quick to deny).

Was the response to the campaign justified? Or is it just a sign of how superficially ‘negative’ advertisements are perceived by individuals who enjoy getting angry at things on the internet?

It may be early days, but the campaign is being hailed as a success. The Ministry of Defence is claiming that Q1 of 2019 has been one of the busiest for the army in seven years (since Capita took over recruitment in 2012). Website visits are up by 78%, and 16,000 people have applied to join the army. Not bad, for a bunch of angry snowflakes.

How did it come to this?

We may have come a long way since Marlboro graced billboards and magazines with their Marlboro Man, and Eva Herzigova’s assets may not be causing any more accidents – but is this a sign of political correctness gone mad?

Sure, the attitudes surrounding alcohol, tobacco and other ‘taboo’ subjects may have changed radically in recent years, but there’s no reason why advertising cannot be as outrageous and provocative as in years gone by. In a world where junk food ads are banned across the entirety of Transport for London’s transport network, and people on the internet get angry at pretty much everything, should we be tailoring to the snowflakes, or embracing an age of political correctness gone mad?

Ultimately, advertising is not there to be believable. Ads are designed to showcase products, evoke emotion and get people talking. There is no reason (within common sense) for regulatory bodies to stop promoting this – instead of banning car adverts for ‘promoting unsafe driving’ or junk food adverts for being, well, junk.

A world without disruptive advertising would be boring – and nobody wants to live in a dull society.