2020 September Issues: Who’s making waves and changing it up 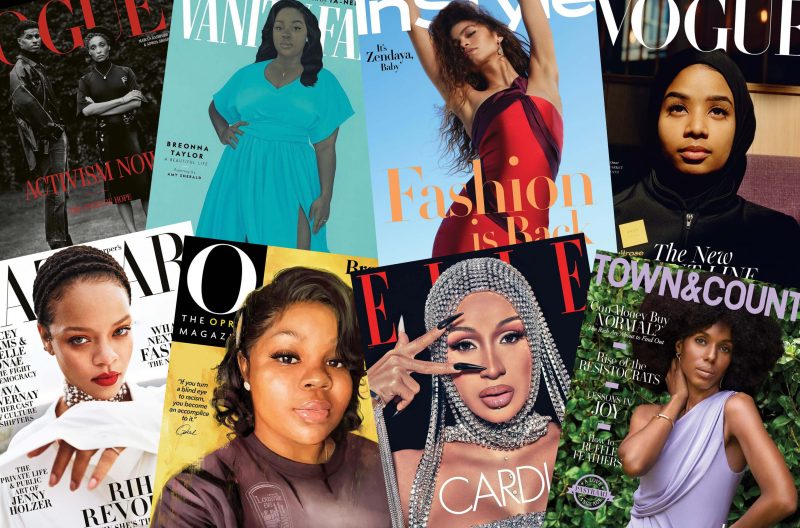 The illustrious ‘September Issue’ is world-renowned as the most important issue in the fashion magazine calendar each year. It essentially signals the end of summer and the switch to a cold-weather wardrobe, but it has become much more than that over the years. Like the Superbowl half-time show, it’s grown to be an advertisers dream.

To put it into perspective, a documentary in 2009 scrutinised Vogue’s 2007 September issue, which had 840 pages, 727 of which were advertisements!

However, due to the decline in physical print magazines and the continual shift to digital processes, publishers have had to re-evaluate their content to be more engaging and provide significant value to readers. People skip ads more than they have hot dinners, meaning they probably aren’t going to digitally flick through a whole publication of ads.

Despite this decline, there is still the audience for the September issues; however, 2020 had other ideas for which direction the publishers need to go.

The primary focus of the magazines has switched from being ‘just about fashion trends and styles’ (to summarise, of course!) to broader issues affecting the whole world, the big two of 2020 being COVID-19 and the new wave of the anti-racism movement Black Lives Matter.

In the past, magazines have been criticised for the lack of inclusivity or racial diversity on their covers. Of course, it should have happened sooner, but if they hadn’t had made a conscious effort to address these issues, there would have been a big backlash.

The majority of the September issues this year feature empowered women of colour, which will have definitely triggered a shift in attitudes from publishers going forward. In the broader sense as well, it will have changed attitudes throughout the fashion industry to be more inclusive and diverse in how it represents people from all walks of life.

One of the biggest fashion magazines worldwide, Vogue, seems to be taking the lead in changing the game. It’s a good thing to see as they have had a rather conservative nature in the past.

Even before the September issue, back in July, the cover stars were key workers from the NHS, National Rail and supermarkets instead of the usual high profile celebrities. In the midst of the global coronavirus pandemic, shouting about fashion and new trends seemed frivolous, and highlighting the people keeping the country running was definitely a good move.

In August, the theme for the covers was ‘Hope’, and all 26 editions of the magazine around the world stuck to this theme, each producing a cover in solidarity that they felt best represented their country. The British version had a portrait of Captain Sir Tom Moore, while other countries had doctors, street photography and intricate artwork. It was the first time in Vogue’s 128 year history that all editions linked up together.

For the September issue, the theme is ‘Activism’ and showcases people taking on the world tackling topics such as systemic racism, disability discrimination, domestic abuse, gender inequality and the climate crisis. With striking monochrome portraits and lots of different versions of the cover for all 20 people, celebrities and non-celebrities alike, there is a real sense of strength and a force for good in the aesthetic and of course in what the cover stars are achieving! Illustration in place of photography

Two other covers that stood out to me were Vanity Fair and The Oprah Magazine. This was initially because they are beautiful illustrated portraits, which in terms of fashion magazine covers is unusual, but when you realise they are of Breonna Taylor, who was shot dead by police in her home in the US, they become even more poignant. The death of Breonna, along with George Floyd, sparked wide-spread protests and a strengthening of the Black Lives Matter movement throughout the world.

The shift from showcasing fashion to taking a stand politically and socially by showing solidarity with real-world issues is a bold but necessary move. This has been seen on runways before with fashion designers creating clothes with political ideologies, but very rarely on glossy magazine covers. It’s a move that could divide audiences if they disagree with the magazine’s point of view, but also strengthens the publication’s moral standing and shows they are not out of touch with the world. This strange time in the world has definitely changed a lot of people’s attitudes towards each other, with hopefully more respect and care going forward. High profile magazine covers and September issues don’t necessarily help solve the problems of today. Still, they certainly help the matters to be seen by a wider audience.

The fashion industry has had and will probably still have its controversies, but going forward, I think we will see more progressive and thought-provoking covers and cover stars in the future.

Finding a silver lining in lockdown: the direct-to-consumer revolution