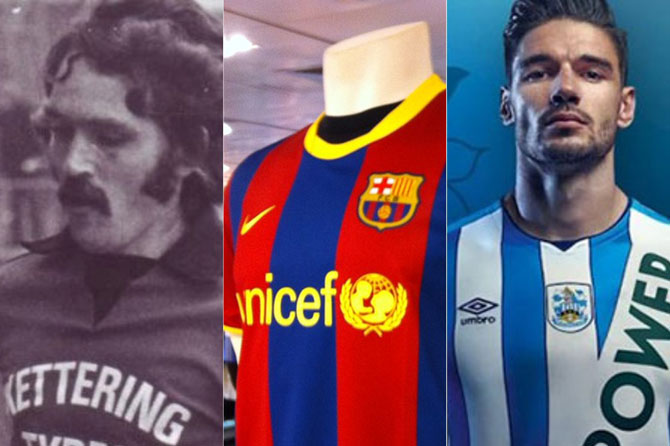 I’ve been working at LITTLE for nearly a year now, and this is the first blog I’ve written on football. Anyone who knows me will no doubt agree that this is incredibly surprising!

While I’d love to sit here and write for three hours about what takes place on the pitch, notably how Fabinho is the most graceful footballer ever to play the game and should be worshipped by fans around the globe, I’m going to talk about the off-field side of football, and more specifically, shirt sponsorships.

There’s absolutely no doubt that the rise of the new shirt sponsorship deal has been astronomical. Since its modest inception into the English game in the 1970s, it has undergone significant change, regulation and even controversy. Despite this, it is now incredibly uncommon for a club at any level of the footballing pyramid to not be associated with a business of some sort.

Whether you like football or even loathe it, there’s no denying that the idea of putting your brand on a shirt that will be sold to potentially millions of consumers around the world is genius. It does, however, come at a price these days.

So, without further ado, let’s go into the history of shirt sponsorship, and assess just how much it has affected the game.

A brief history of shirt sponsorship in football (Kettering Town were the first club to have their shirts sponsored in 1976. Credit: Sportslens)

While you may think that the birth of shirt sponsorship in football began at behemoths like Manchester United, Liverpool or Arsenal, it was actually lowly Kettering Town that started the trend in 1976, signing a deal with local business Kettering Tyres. They were subsequently fined, however, by the FA, and ordered to remove the sponsor.

Taking inspiration from Kettering, the first significant kit deal was signed by Liverpool in 1979, agreeing to a contract with Japanese conglomerate Hitachi and sparking the mass sponsorship of the most successful clubs in the country.

While traditional shirt sponsorships focused primarily on a brand logo or name on the front of the short, the rise of the arm sleeve sponsor has now taken full effect, with companies like Angry Birds (Everton), Western Union (Liverpool) and Visit Rwanda (Arsenal) all taking centre stage.

There is still a shift in shirt sponsorship taking place, however, highlighted by the sponsorship history of Catalan giants FC Barcelona. Think back to the turn of the 21st century, and how pretty much every major football club in the world had some form of sponsorship graced on their kit, bar one.

FC Barcelona famously refused to brand their shirts, instead opting only to display their club crest and the Nike logo as they were the company who actually made the kits. This, however, changed in 2005, when the mammoth club decided to sign a contract with global charity Unicef for their shirts, a contract with a difference.

Instead of receiving a sponsorship fee from Unicef, Barcelona actually donated an annual sum to the charity, agreeing to brand their shirts with the logo on the front.

Was this a move for publicity? Were they just trying to be different? Who cares. In a world dominated by financial gain and profit, it was incredibly refreshing to see such a dominant football club choosing to use sponsorship for a good cause, despite losing money.

The lure of the money associated with a lucrative kit deal eventually caught up with Barcelona in 2010, however, as they agreed to a deal with Qatar Foundation in 2010 worth £25m a year, followed by an even bigger deal in 2015 with Rakuten, worth an estimated £47m a year.

What the f&*@ is that Paddy power? We all know what Paddy Power are like when it comes to marketing stunts. From the funny to the downright outrageous, the Irish bookmakers certainly know how to grab public attention, and, with the development of football shirt sponsorship in recent times, you’d be forgiven for thinking that they would have entered the fray many years ago.

When they did decide to become involved in football shirt sponsorship earlier this year, however, they certainly made their presence known.

In a move that has never been seen before, Paddy Power announced in July that they would be the new sponsor for Championship side Huddersfield Town’s shirt, and, instead of your standard company logo gracing the front, decided to brand their logo diagonally across the entire strip, sort of like something you’d see at a beauty pageant.

Absolutely gopping, isn’t it? It’s safe to say that the reaction to this unveiling wasn’t particularly positive, as the tweets below prove:

Some smart-arses did pull up the FA regulation on shirt sponsorship; however, highlighting that Paddy Power’s logo was far too big to meet the required size of the advert.

Come on, you're surely not falling for the Paddy Power Huddersfield Town shirt stunt, are you? This is the FA regulation. pic.twitter.com/ugjpnezFbV

With suspicions widely aroused, Paddy Power decided to give up the game a week after their announcement and revealed that the kit was all a big hoax (Huddersfield Town did play one pre-season friendly match in the harrowing shirt, however).

Rather than soil a perfectly good kit with advertising, it emerged that Paddy Power intended to do the complete opposite, and effectively ‘unsponsor’ the shirt.

The premise is simple; Paddy Power is paying to sponsor the shirt on these clubs, but will not have their logo appear anywhere on the kit. The idea aims to give football shirts back to the clubs and the fans, urging other brands to do the same and focus on football rather than advertising.

Since unveiling Huddersfield Town, many clubs across the UK including Macclesfield, Newport County and Motherwell have all agreed on deals with the bookmaker.

Given the vast amount of money and exposure associated with sponsoring a football kit these days, especially at the highest level, it’s unlikely that the most significant global corporations are going to remove their branding from football kits anytime soon.

One thing that Paddy Power has managed to do brilliantly, however, is to draw attention to their own brand while appearing to oppose the idea of sponsorship in football. Sneaky, yet effective.

Ultimately, it was only going to be a matter of when football shirts would become suffused with sponsors since Kettering started the trend all those years ago. The culture of consumerism in the modern age, as well as the vast amounts of money being pumped into the game globally, has allowed for brands that typically would have nothing to do with football to be advertised to the masses week-in week-out.

The ethics of mass sponsorship is something that will always be debated, especially following stories like Barcelona’s decision to accept the big bucks after previously working with a global charity.

For better or worse, however, it is now an integral part of the most popular sport in the world. From stadium naming rights to the match ball, if it can be sponsored by a business, it probably will be. Is it a bad thing? That can only really be determined by your opinion on mass consumerism. Let us know your thoughts on our Twitter or Facebook.

Does sex still sell? How the Great British Bake Off uses innuendos so...