A day of disruption at Design Manchester 2018 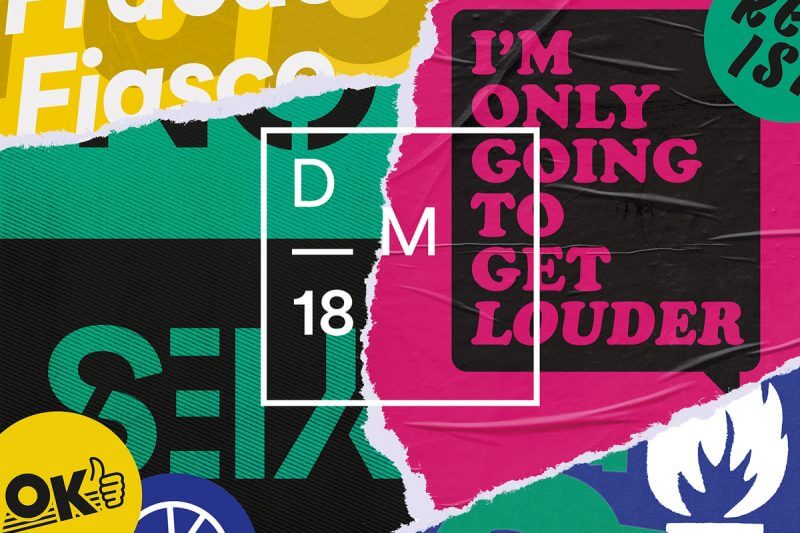 As a first time visitor to the Design Manchester Conference: D(isrupt)M, I was excited to see how this creative northern city would showcase the eclectic designers on the lineup. Here is a brief roundup of what I took away from the day.

The theme this year was to disrupt, make some noise and ask questions, even if the answers aren’t always there. The speakers included people who have disrupted in their fields: from Kaye Dunning creating engaging and trippy worlds for Glastonbury’s Shangri-La to Matt Ipcar’s designs being used to elect the first black president of the United States.

The venue itself provided the perfect arena for the speakers to “get louder” with their views, The Bridgewater Hall’s reinforced concrete structure gives the acoustics “enormous density and mass” which allowed each talk to fill the room with creative ideas.

In full flow… photo by @manox_mcr

The thing I love about design conferences is when someone walks on stage that you didn’t have a clue about, then by the time they say thank you and walk off you are fascinated by their work and want to know more.

Kate Dawkins proves this – she specialises in creating large-scale digital graphics for live performances and brand events. She went in depth into how shows such as the Olympics 2012 Opening and Closing Ceremonies utilised 75,000 LEDs and barely any practice before the main event. Particularly with the World War One Remembered: Passchendaele Centenary live show, the challenges seemed enormous, but with the use of 3D modelling and mockups the final result was a fitting tribute to the soldiers that died. Throughout the talk, she mentioned how she didn’t really know what she was doing most of the time, but the results speak for themselves.

Talks like Dawkins’ make me appreciate how diverse the creative industry is and it’s not all just branding and drawing nice pictures. We enjoyed her talk so much; we went to see her again during the day when she featured on the Lecture in Progress: Creative Lives podcast where she spoke more raw about the process and her life as a creative.

Probably the slickest presentation of the day was from Ben Wright, co-founder of DesignStudio, best known for their branding work for Airbnb, Deliveroo and The Premier League. In a very engaging way, he shared the story of how the studio was set up using the foundation of putting design at the heart of everything and challenging the traditional setup of the design agency process. I have always admired the work that DesignStudio do, regarding the depth they go into on projects and the bold and striking results. An example Wright spoke about was when pitching for the Airbnb job, they built a listing in the studio and posted it on the site to show how involved they wanted to be with the brand. The clients saw this and immediately wanted to work with the studio.

Practising what he preached the presentation was suitably branded and ended with a roundup of the slides that showed how the studio’s ethos ran through the whole talk. Without the audience even realising, it was all fully tied together and had a really satisfying ending. Wright is clearly strong at public speaking, but still conveyed his personality and the relaxed nature of the studio.

A brilliant day — HUGE thank you to Design Manchester @designmcr @beingmalcolmgarrett for inviting me to come and talk at the very inspiring D(isrupt)M Conference. I had such a great day listening to the other speakers and chatting with lots of people afterwards. A truly memorable experience. Most importantly a supersize thank you to such a great audience and I loved the massive stage @Bridgewaterhall #thebridgewaterhall #designmanchester #disrupt photo by @jackanglesea . #moragmyerscough #moragbelonging #spacesintoplaces #talk #stage #design #art #activism #anarchy

One of the highlights of the afternoon session, quite literally, was Morag Myerscough. A truly colourful character (even though she was wearing black and white on the day.) Her work spans many different media and always incorporates a vast spectrum of colours. With companies, councils and residents thinking that her designs “would kill people”, Myerscough has faced opposition to her striking installations around the country but has more often than not cheered up spaces for people to enjoy. Showing us some old photos of her eclectic family, that included a circus clown, it was easy to see how her personality comes out in her work. Speaking about how her collaborations with Luke Morgan really brought out her true calling within the creative industry.

One of the standout pieces of work created was for Sheffield Children’s Hospital, that initially was shunned by the hospital bosses on the grounds of cleanliness and practicality. However, Myerscough’s persistence prevailed as she made small-scale mockups of a few different rooms with the colourful designs applied. Then took them around the wards and the majority of people agreed they would love the rooms to look like them, so that was that – the 46 en-suite bedrooms and six multi-occupancy bays now covered with bold, colourful patterns and shapes.

The whole day left me feeling inspired, as always with design conferences; it reinvigorated and reinforced why I love design and the creative industry as a whole. The things that people create in their different fields can vary so much but are more often than not really impressive. The post-conference pint accompanied inspired chat of how the advice we had heard could refresh our designs and creative ideas going forward. Of course, being designers, we held the free printed items given close, and the poster now has pride of place on our inspiration wall, real folds and all, not these fake mockup ones added in later. 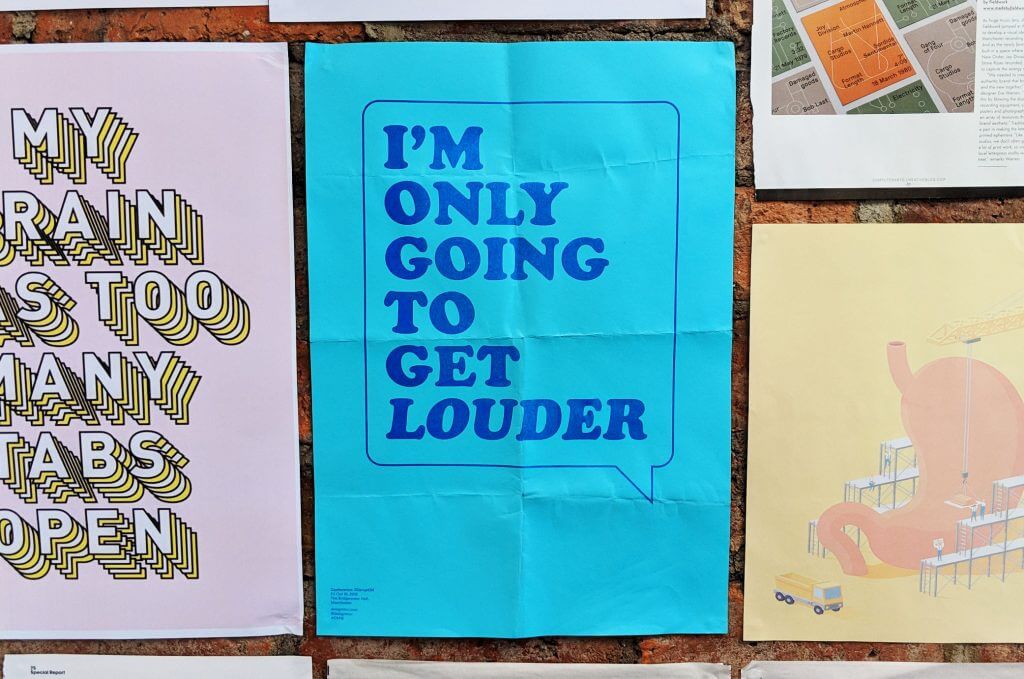 Thank you Manchester, see you next year!