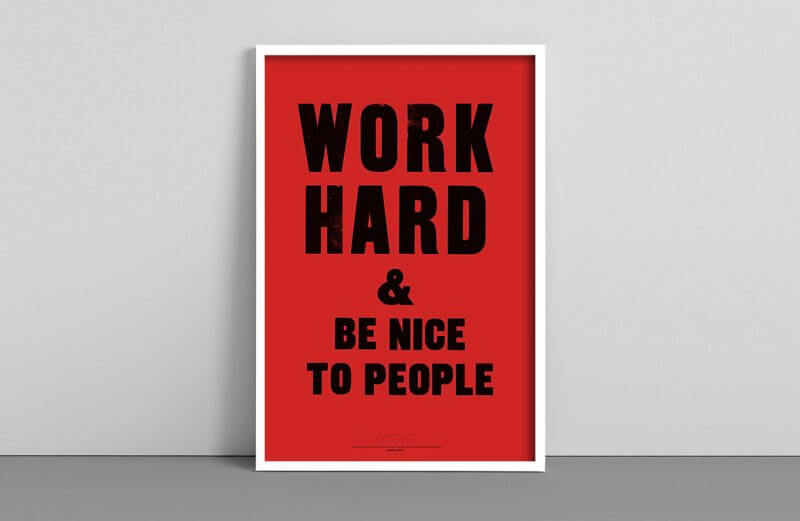 ‘Work hard and be nice to people’… a phrase once overheard in a local Sainsburys, turned into a mantra and one of the most influential quotes in design by the one and only Anthony Burrill.

Last week we were lucky enough to catch Anthony in Sheffield as part of the Lecture In Progress series held at Sheffield Hallam University. Over the period of an hour and a half, he explained where his love for typography and printing began, his favourite and upcoming projects and how he thinks sharing his hands-on work to digital platforms such as Instagram in the modern day works as an advantage. 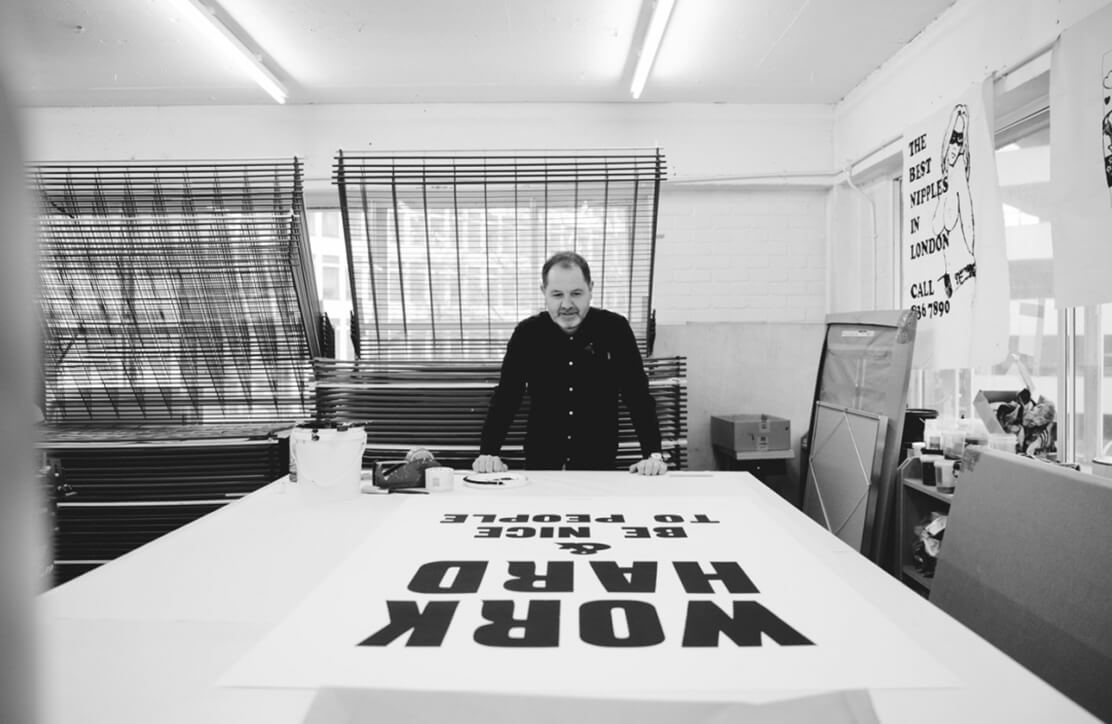 With a portfolio that spans the last 40 years, Anthony Burrill has become known across the world for his simplistic, type filled prints, created using original press machines and screen printing techniques. His work is held permanently by the likes of the Victoria and Albert Museum in London and the Cooper-Hewitt National Design Museum, New York but he has been exhibited in galleries across the globe including the Barbican Art Gallery, the Walker Art Center and the Design Museum, London.

When we heard he was coming to Sheffield, we jumped at the opportunity to see him in person, especially after one of our designers recently read his ‘Make It Now’ book, released last year. 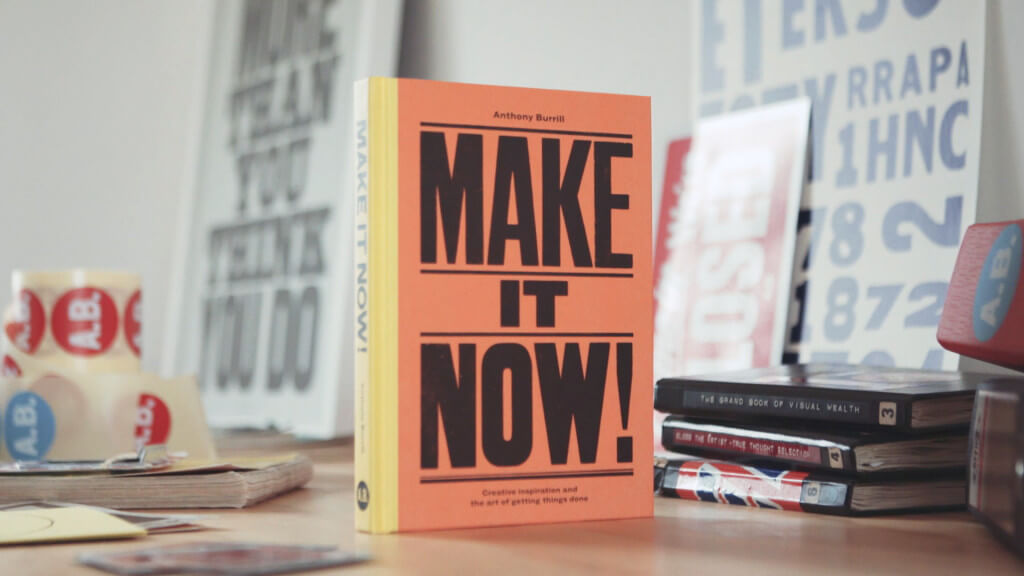 It’s safe to say he has and continues to explore all avenues of printing methods within his speciality, this became evident as he explained the story behind some of his favourite commissioned pieces. Two, in particular, stood out to us as works of unique thinking and incredible methodology. Firstly his large-scale ‘Persistance is Fruitful’ print, created by a steamroller (… yes you read correctly, steamroller). Commissioned by the Ditchling Museum of Art and Craft, he pushed the boundaries of his specialty by setting up and creating a custom print that used a steamroller as the main printing force, see the short film about the project here as well as a brief look inside his purpose built studio – warning: it’s a thing of beauty.

Secondly, the ‘Oil & Water Do Not Mix’ print, not only was this supporting the clean up of the BP oil spill off the Gulf of Mexico but it was another example of just how ingenious some of the processes AB uses really are. Working with media agency Happiness Brussels, a limited edition print was created using some of the leaked oil from the beaches of Grand Isle, Louisiana, raising money for the Coalition to Restore Coastal Louisiana. It was another great example of how we as designers can use alternative methods and processes to create artwork for almost any cause or client. 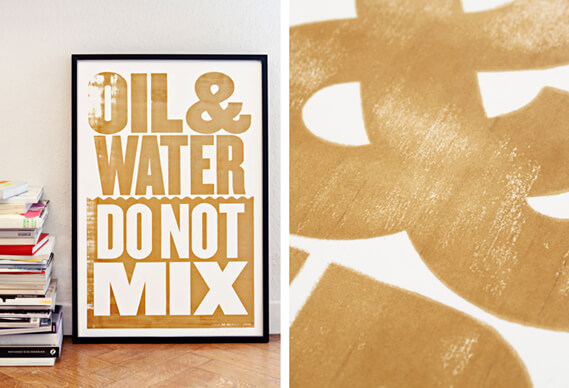 It was great to hear how as much as Anthony loves projects like these and creating artworks that are truly unique, he decided to take a break from working on commercial design projects and decided to concentrate on his own print collections. With a focussed passion for design and print, he has been able to travel across the world speaking at key events and spreading his enthusiasm for his craft along the way. From meeting Mexican printers using old press machines from the early 1900’s to presenting his methodology in countries as far as South Korea, Germany, Kenya and New York City. The passion he shows really is inspiring and makes you want to get out there and start creating. 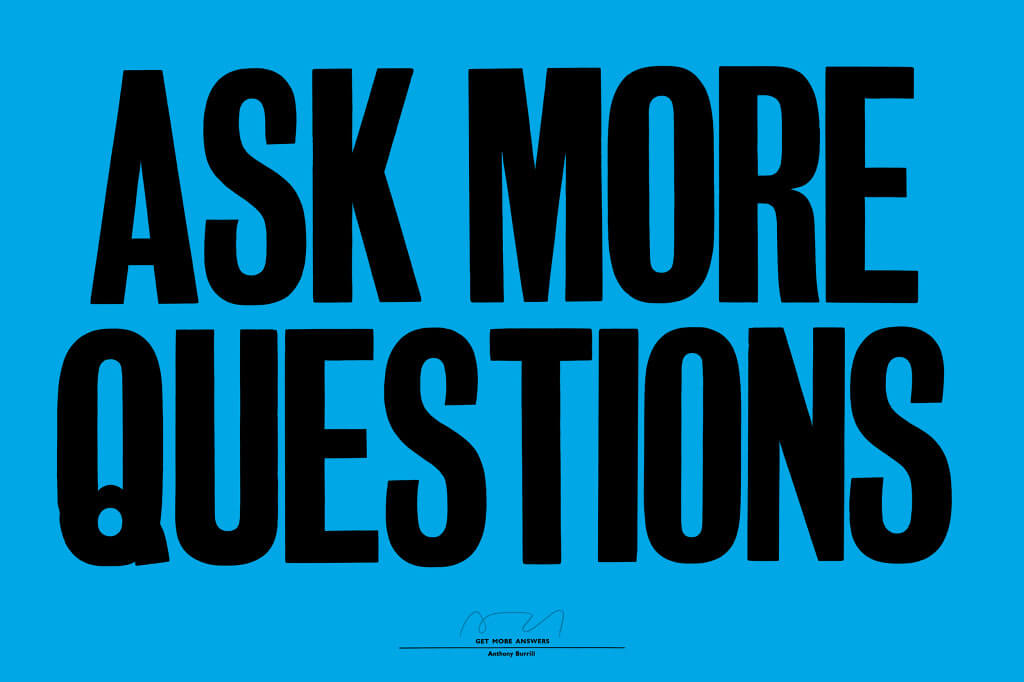 Towards the end of the session and during the Q and A, a question came up about sharing his print work digitally and if he saw it as a negative or positive thing. It was interesting to get on to this subject and clear to understand that the importance of how we share things in the present day can really alter how we work. Coming from a time where he has seen channels like Instagram rise to fame, he explained that the world we live in today provides great advantages for designers and creatives. Having the ability to create a piece of work and share it online in front of over 70k followers is an incredible thing, unfortunately there is no way to control how far your work goes or how many times it is copied or cloned, but this is just part of the challenge of being a designer in the world we live in today.