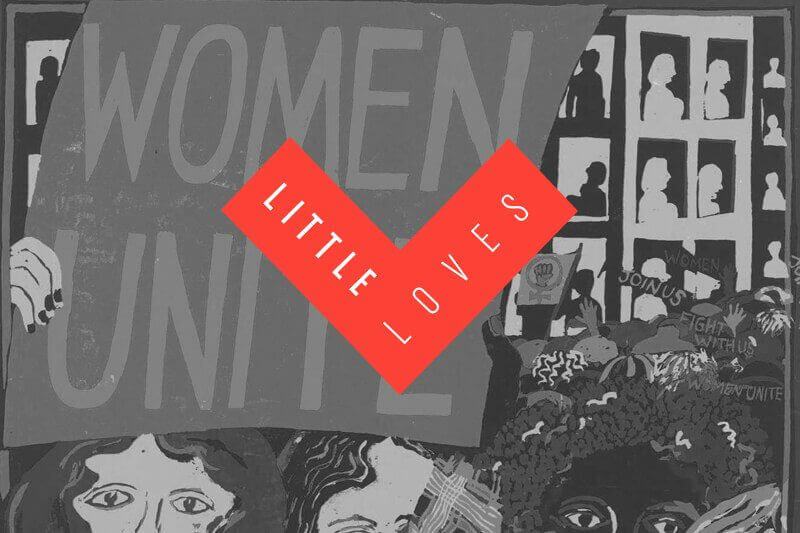 This weekend, I attended a talk by See Red Women’s Workshop held at the London Radical Bookfair, in Goldsmith’s College, London. During the talk, I learned how the print workshop began, their design process and the ideas and discussions behind the posters. The talk was given by three of the original members of the collective, which was previously based in Camden Town, but moved to South London where the premises were attacked numerous times by right-wing group, the National Front. As someone who is interested in print, it was fascinating to hear the experiences being in an unfunded, feminist, print collective in a male dominated industry, from the women themselves.

Who are See Red?

See Red was a feminist printing collective created in 1973, by former art students who were frustrated at how male dominated their art school experience had been. Out of a shared passion for combating the negative depictions of women in the media and advertising, they set up the workshop to create posters that challenged the viewer to question how women were being depicted, and show positive alternatives that provide hope for the future. They aimed to dismantle and expose the issues that affect women and make the audience question their perceptions of themselves and other women.  The workshop consisted of around 6 members at a time, but around 45 women had worked with the group between 1973 and 1990 when it closed down. The posters were designed primarily for the women’s liberation movement, but designs were also created for other groups and organisations that were linked to the movement. The workshop also offered apprenticeships and worked with women of colour and gay women to make sure that their struggles were included in the women’s liberation movement and not ignored.

As the name of the group suggests, the aim of the posters was to provoke anger at the oppression women face. However, the audience must also be able to turn that anger into action. In order to raise women’s consciousness, the posters informed and provided tools for women to unleash their anger and fight back at oppression.

Initially, the themes of the posters focused on the member’s own personal experiences and issues that they were facing as women at the time such as domestic labour, the role of women in society, negative images of women, race, and sexuality. While some of the themes covered may seem outdated to us now, such as housework or domestic labour, the reality is that there are still discussions and fights to be won for women decades after these posters were created.

Operating as a collective meant that no individual took all the credit for the designs. Members would discuss ideas and concepts and work together to refine the design until all members agreed. This was certainly at odds with how we expect organisations to function, but it allowed for members to share their skills and knowledge and produce work that was both intelligent and printed at a high standard.

Early on, the main technique used was “blocking out” with a water-soluble filter. While starting with only basic equipment acquired through firms closing down or donations, this did not limit the quality of what the collective produced. Years later, and after funding was secured, additional equipment such as a darkroom was introduced so that photographic stencils could be used.

The visual style of the posters could be said to be a result of being limited as to what resources were available to the collective, but the simplicity of the design ensures that they’re easy to understand accessible to everyone. The simple hand drawn lines, bold colour palettes and “cut and paste” embody the “DIY” style has now found its way back into mainstream design, as many want to replicate the impact it has on the audience. Simple slogans and a clear concept are as much of an artistic challenge to create a complex illustration. The collective was also influenced by art styles of the time period, such as other political posters and the punk movement, but avoided mainstream advertising as this often featured women in a negative light. 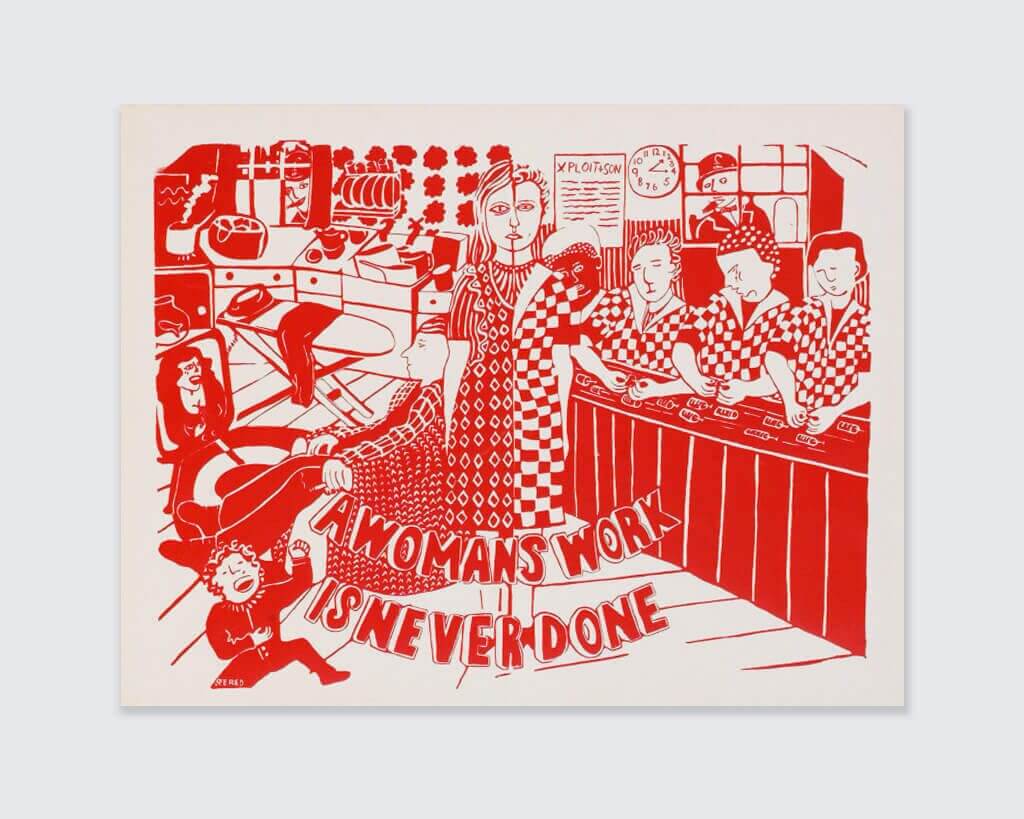 A Woman’s Work Is Never Done

One of the early themes that the collective wanted to bring awareness to was that of domestic labour such as childcare and housework, is not valued as “real” labour, despite the fact that it takes up time and requires effort and skill – just like any job. The poster features a woman who is split in half, with the left side at home looking after the house and children, and the other at work in a factory. 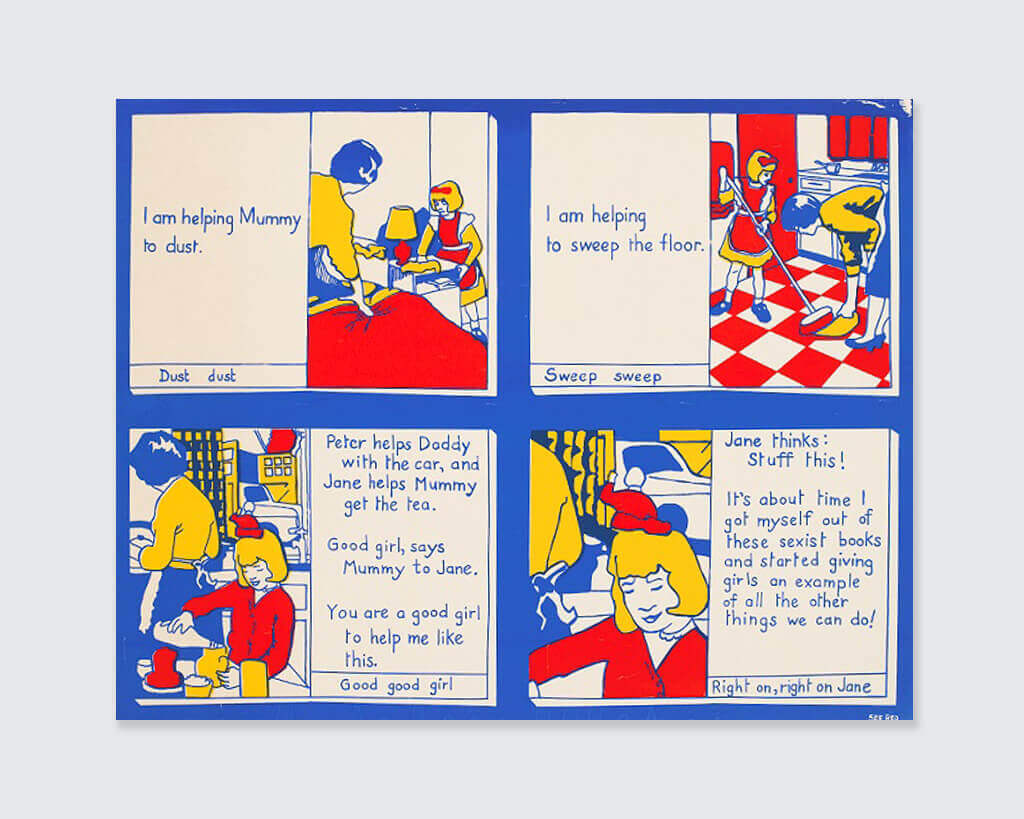 Many people will fondly remember learning to read through Ladybird’s Key Words Reading Scheme, or as it’s more commonly known as, Peter and Jane. What they may also remember is the recurring gender stereotypes of the activities that Peter and Jane were shown to be doing with their parents in the book. Jane would spend most of her time with her mother, performing domestic tasks whereas her brother, Peter would be shown playing outside with his Father. This poster humorously parodies the typical layout and tone of voice that the books are well known for in order to highlight how the books limit what Jane – and all girls are capable of. 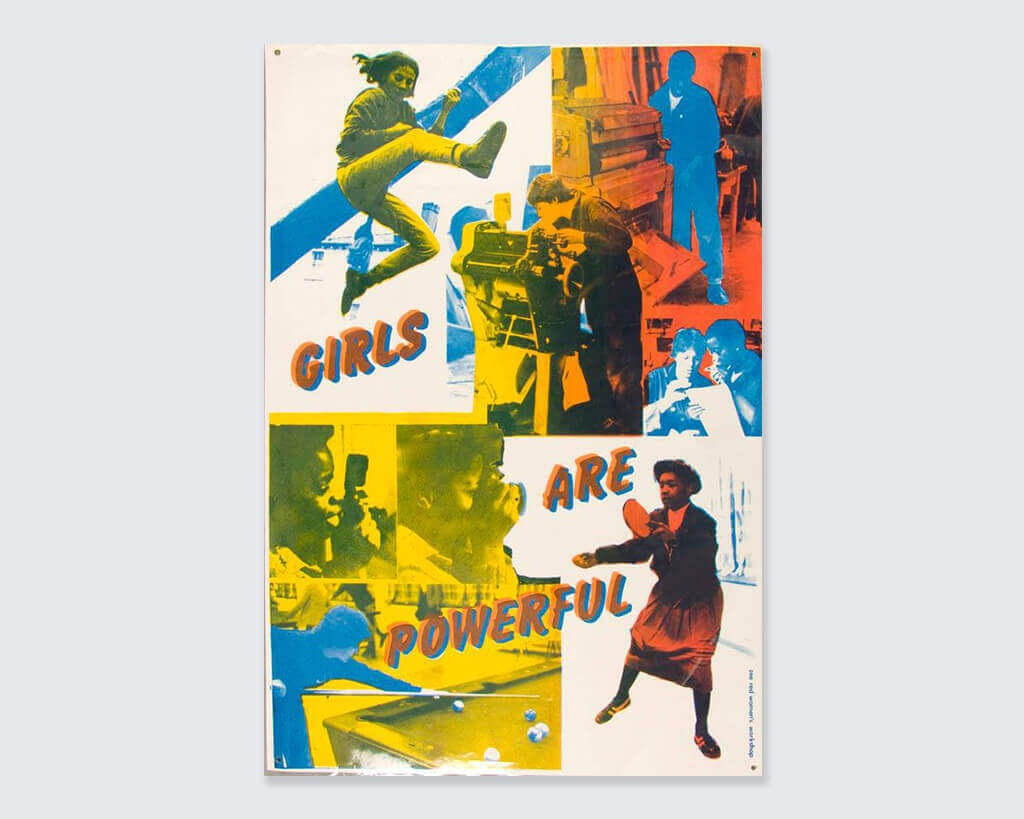 This poster was created as a response to criticism that the issues the group covered were almost always negative, and therefore for the women who view them, depressing. At the time, after school or activity groups were very much “boy’s clubs” and it was rare to see women participating in activities that were seen as “for boys”. The women in the poster are shown mid-action in various activities, showing the diversity of what women are capable of. 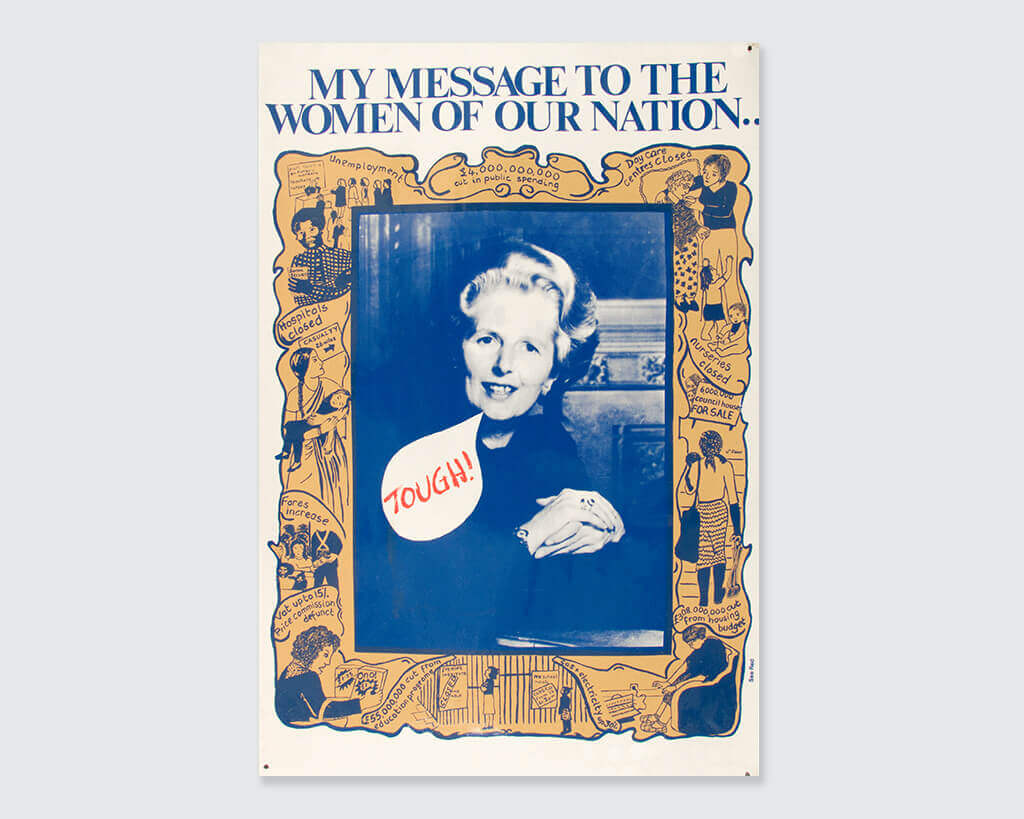 Perhaps the best example of a poster that on first glance may not seem to be as relevant today as it was then. However, when looking closely at the illustrations around the edge of the photograph, we can find phrases are all too familiar to us such as “Nurseries closed, cut in public spending, fares increase…”. The posters aim is to highlight the difference between the empowering words and anti-feminist actions of Margaret Thatcher’s government, as her election was seen by some as a victory for feminism. 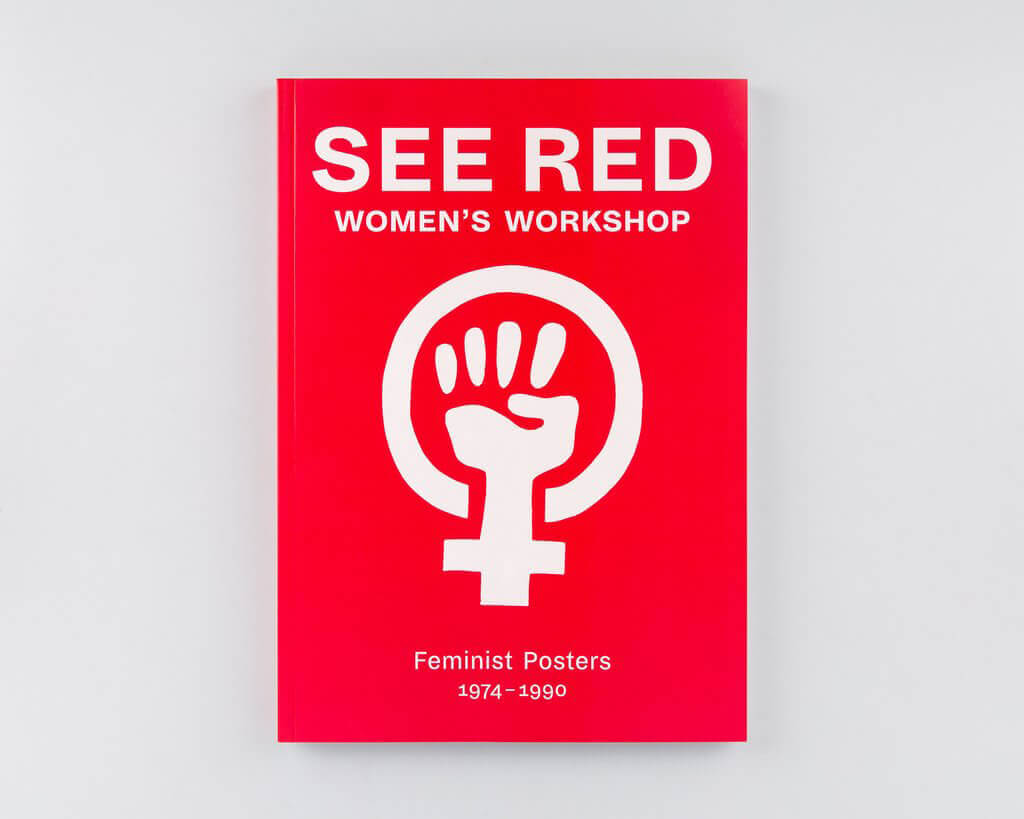 Thought the workshop closed and the posters are no longer printed, in 2016 a full-colour book of all the original and commissioned posters was published. Along with many gallery exhibitions, this thankfully ensures that the important work of See Red is getting the recognition it deserves and reaching those who need it – which is unfortunately just as necessary now as it was back then.