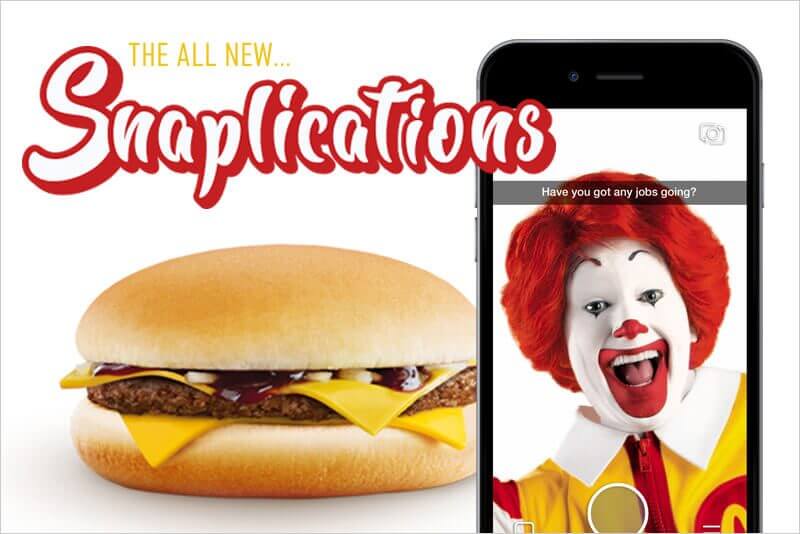 News hit this week that McDonald’s are considering shaking up their current recruitment system and asking prospective employees to apply using Snapchat instead… and this got us thinking; is the traditional interview on its way out for good?

‘Snaplications’ are currently only rolling out in Australia and McDonald’s has created a themed lens which allows jobseekers to virtually try on the uniform, then send a 10-second video back to the company. Once the application is reviewed, McDonald’s will send users back to the digital careers hub where they can download an application form. Around 65 per cent of McDonald’s Australia’s employees are under the age of 18, so Snapchat is the perfect way to appeal to this audience.

Shaun Ruming, chief operating officer of McDonald’s Australia said “I’ve learnt a lot about Snapchat recently from my 14-year-old daughter. We think this is actually a world first. Snaplications is basically a Snapchat ‘lens’ that gives users the ability to apply for a job — or at least commence that process — by sending a 10-second snap. We’re the largest employer of youth in the country, so we’re trying to look for new and innovative ways to recruit crew people.” Mr. Ruming also told News.com.au that while the 10-second video wouldn’t replace the traditional hiring process, it would form part of the application.”

So are Snaplicationts the future of recruitment?

Since McDonald’s will be continuing their current employing system combined with the Snapchat we think it’s a pretty good idea, especially when you look at the fact McDonald’s target demographics – Gen Z and Millennials, make up a combined 74% of Snapchat users. Additionally, it allows candidates to show their personality before the interview stage and gives McDonald’s a feel for the person.

Although this is only happening in Australia currently, there is no telling where it could end up! We’re pretty sure that other companies will also jump on this idea, and why not? Recruitment shouldn’t have to be boring, and since the traditional way of interviewing has been out for what seems like centuries, maybe it is time to switch it up!

Do you have an idea that would revolutionise your company? If so here at LITTLE we can help that idea come to life! Contact us today.

Our LITTLE charity events for 2017